A Hard Look at Hard News 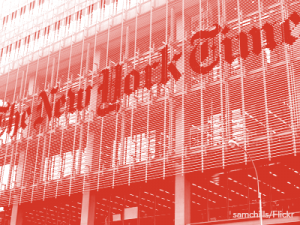 //Note that quotes used throughout the paper can be found within Hard News by Seth Mnookin.//

In 2001, Howell Raines began his tenure as the Executive Editor of the New York Times. He was a controversial figure, and under his leadership, the Times became a faster, more competitive paper—and a tenser newsroom to work in. Raines, entrusted with a paper that determines what stories will dominate the 24-hour news cycle, may have allowed his own viewpoints to shape the content of the NYT. While “he had great instincts for stories that would excite readers”, Raines proved during his time as editorial-page director that his own interests would take precedence when he published 36 editorials on campaign finance reform in his last 8 months in the position. Later, as executive editor, he chose the stories that he thought would garner the most interest and pushed reporters to get scoops on every beat—which possibly served to exacerbate the challenge of “forcing the Times on a national audience” without losing its New York base. In essence, the leadership of the paper influenced what stories were told, and how they were valued.

This leads me to wonder: is there a fundamental disconnect between journalism’s self-defined objectives and the public’s expectations of it? Take the controversy over media coverage of the March 13 bombing in Ankara vs. that of the subsequent attacks in Brussels, Belgium: if the purpose of journalism is to inform the public, then it’s an outrage that Brussels received more coverage than did Ankara. But if, as my professor noted in class, the objective of a news organization is to gain readership and turn a profit, then the gap in coverage is not so egregious.

What’s more, the factors that determine how stories are valued to the Times, including leadership and attempts to acquire a broader audience, are basically unknown to readers. Certainly Raines’ mistakes have been publicly dissected and—one can only assume—corrected for in succeeding executive editors, but the key here is that the public is not explicitly informed of how exactly the Times serves as their informant. Obviously I don’t have the resources to conduct a study, but I can almost guarantee that less than 10% of Americans could name the current executive editor of the New York Times, Dean Baquet, much less his newsroom policies or passions. I found one quote in the book particularly affecting: “[Timesmen] have the power to move markets, to influence elections, to shape world affairs. They get their fingerprints (and their bylines) on the first rough drafts of history”. If this is true, then the media, particularly trusted names like the New York Times, have nearly as much power as the government to influence policy by choosing what gains urgency in the eyes of the public—and many people don’t even know who’s supplying their information.