For the past few months, the office has been abuzz preparing for Kenan Distinguished Lecturer Michael Walzer. However, just as I was unfamiliar with the last KDL, Krista Tippet, I admittedly did not know much about Michael Walzer. I only knew that he was “a big deal in the political science world.” What became quickly apparent when I attended his lecture What is the Responsibility to Protect? And What Does it Mean in the Syrian Case? was that he was also a star in the academic world, not just political science there were attendees from philosophy, public policy, and others departments.

Michael Walzer has a familiar face, weathered and kind. Even before Walzer shared his thoughts, it was evident from the introductory remarks given by Noah Pickus, co-director of the Kenan Institute for Ethics, and Max Cherem, Senior Fellow, that Walzer’s writing are classics in academia. Although Pickus and Cherem completed their doctoral programs in different decades, they both recalled reading Walzer and they reflected on how influential and integral his thoughts and ideas were to their work. 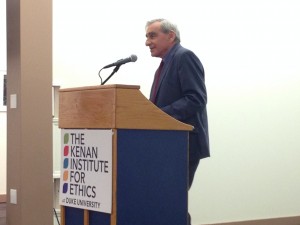 I have hypothesized why Walzer’s work may be so timeless, and my best guess is that, at age 81, Walzer has lived through key periods of the 20th Century. For example, in his own words, “growing up in New York City as a young Jewish boy during World War II” gave him a unique perspective on pacifism and the necessity of entering certain wars to prevent mass genocide or lesser human rights violations. Although his talk was focused on the Syrian Crisis, he referenced numerous other conflicts, in Bosnia, Rwanda, Kosovo, Darfur, Khmer Rouge and Vietnam. Here I found myself having difficulty remembering the Syrian Spring Rising. Yet, Walzer remembers these struggles that he has lived through and is able to compare the motivations, or lack thereof, for the international community’s intervention in each of these fights, its strategies, and its successes or failures.

Walzer maintained that that there are three general requirements critical to intervening in a foreign war or conflict:

1) Pick a winner by choosing which side to support and help this side prevail.

2) Seize the arsenal of weapons to prevent their use against humanity.

3) Protect whomever was defeated by guaranteeing the safety of minorities.

His whole idea is that you need stability once the conflict is over. While the first two stipulations are fairly straightforward and appear necessary for stability, it is unclear how his final requirement would be achieved. Walzer seemed to understand that if the losers were protected peace would ensue.

Walzer recognized that deciding when to intervene is a difficult question. Should the international community intervene when Syria is gassing its own citizens? How should it respond to Boko Haram kidnapping young girls? What should the world do in response to ISIS? “What should you do when you don’t know what to do?” to which he answered, “there is no right answer.”

From the images inundating the media over the past years, it is clear that the world community has been unable to guarantee the safety of minorities.  There are floods of refugees seeking asylum from conflicts in their home countries. Thus, Walzer’s third condition seems impossible to satisfy.

It is hard to justify intervening in a war from an outsider’s perspective. Walzer even admitted that there is high human cost for humanitarian interventions and no material benefit to the intervening country of stopping genocide. Despite this uncompensated cost, there is still a moral responsibility to act. Walzer argued that there is a responsibility to protect and intervene as long as there are people who need to be protected. He stated that, “as soon as terrible things start to happen, there needs to be a response.” To me this answer seemed unsatisfactory. First, will a response always deter the terrible things that occur — the inhumanity that seems to be part and parcel of the way people relate to each other? Second, will there not always be people who need protection? Third, should the United States or individuals who have the power to intervene always mediate for those who need protection? How do we discern which atrocities are bad enough to make the cut?