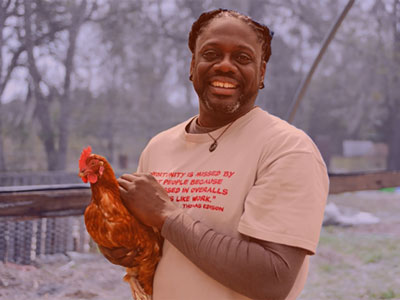 After talking to Matthew Raiford the first time back in February, I was so excited to meet him in person. Over the phone he just exuded enthusiasm for his work as both a chef and a farmer or as he likes to call himself Chefarmer.

Matthew Raiford grew up on the family farm that his great-great-great-grandfather purchased and now farms the same land as a sixth generation farmer. Yet, the challenge of farming does not seem to be enough to keep Raiford busy as he also has a restaurant, The Farmer & The Larder in Brunswick, Georgia that he owns and operates along with Food Alchemist Jovan Sage.

I was able to meet Raiford prior to the his talk on the connection between food production and preparation at Durham Spirits Co.’s new location. Durham Spirits Co. hosted our resettled refugee cooking class, which was the first part of the three-piece series on food, culture, and ethics. I arrived at Durham Spirits Co to find Katie the owner of DSC animatedly talking with Raiford about his restaurant and different techniques while he was questioning her about the cooking class model she employs. As a rule of thumb, individuals who incorporate food as part of their livelihood are genuinely interested in other foodies’ professions and delve into discussions about shared interests.

It was evident that Chef Raiford was right at home talking in front of an audience as he was in the kitchen. He knows how to read a crowd and is able to anticipate individuals’ questions and interests. Chef Raiford opened up talking about his history with food and how he studied both cooking and farming professionally. His first anecdote related to the memory of soil. Upon returning to his family farm after attending school for farming, Raiford initially tried different techniques such as adding amendments to the soil for his ocean sea pea crop. He mused about how sometimes overanalyzing certain tasks can cause failure. His neighbors laughed at him for adding fertilizer to the soil and told him that all he needed to do was drop seeds right on the earth. To which he concluded, there is as much to learn about the past as there is to learn about the future.

In addition to joking about his past faux pas on the farm like getting stuck with too many pigs, Chef Raiford spoke about the influence Southern climate had on cooking and how historically different food items such as biscuits were originally scones that did not cook similarly in the humid weather. He pointed out how different things that are considered “Southern” are not solely “Southern.” For example, grits which is typically associated as exclusively southern can be found in other cuisines in a more finely ground form of polenta.

Chef Raiford talked candidly about growing up in a hostile racist South as a black male. One of his stories that stuck with me was about how fried chicken was used as a beacon of safety on family roadtrips up the east coast. Raiford’s family, along with other black families, used the “chicken trail” – a route that included fried chicken places that implicitly indicated where it would be safe to gas up.

As the talk progressed, Chef Raiford continued to spin stories, explaining about the historical intertwining of food and southern culture. Although, slightly cliché, Raiford summarized how food is a common denominator that brings people from all walks of life together.