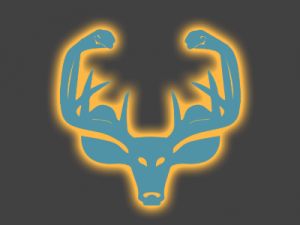 Thanks to the resurgence of antler sprays as highly questionable athletic supplements, deer antlers are still trending a month after Christmas.

For thousands of years, deer antlers have been used as a Chinese remedy for essentially everything (a quick Google search will yield a wide variety of results). While most of the antler benefits have not been scientifically proven, it is believed that these antlers contain high concentrations of IGF-1 (insulin-like growth factor 1) – a protein that promotes cell-growth. As a result, many deer antler supplements have been dubiously marketed as performance enhancing wonder drugs due to speculations that IGF-1 will boost muscle growth.

The “antler issue” has been plaguing sports for a while (IFG-1 is banned in professional leagues such as the MLB and NFL), but it regained popularity recently when some high-profile football players became linked to the antlers. While it is discerning that professionals are using illegal substances, it is really alarming when Christopher Key, the co-owner of an athletic supplement supplier, informed the public that he has been selling these deer antler oral sprays to college football players, and that the usage is undetectable (he has also sold “hologram patches” to some players, apparently). According to Key, his clients are feeling more energized and winning big games left and right.

So while his spray sounds like the greatest supplement since vitamin gummies, it most likely does not work.

Oral delivery of IGF just seems…incredibly difficult, and a quick literature search did not give me any hard evidence on its effects. The same ESPN article that reported Key’s testimony also mentioned a researcher (with actual expertise) refuting the possibility of the spray working. Also, Dr. Jordan Moon calculated that there simply isn’t enough in a bottle spray to be effective – in fact, Dr. Moon believes that the athletes need to use up to at least 5000 cans of spray for it to work (it is also unlikely that the IGF is delivered 100%). Reading Key’s statements, they sound more like commercials than testaments, and Key did not mention how his spray can avoid blood tests. The reason why it is undetectable is likely due to the fact that there isn’t anything in the spray. New Zealand Medical Journal also raises more doubt on the legitimacy of the antler claims (fun fact: New Zealand is the world’s largest producer of deer antlers).

So all this sounds like another hoax (seriously, what is a “hologram patch?”), and the seller is either unethically selling illegal substances to student athletes, or unethically convincing college athletes to buy his useless spray. If Key’s clients experienced any powerful “level-ups,” it is likely due to the placebo effect. Key was quoted saying: “The whole idea is to compete without cheating. We are not bad guys.” And he is right because the  players do not have IGF-1 in their bodies.

But should these college players be punished if the spray doesn’t do anything? We still punish people for unsuccessful cheating (like copying down all the wrong answers), but this case is a bit different because we don’t know if the players know about the IGF-1. To them, they could just be another source of nutrition input, which is not that different from a family remedy of…umm…spinach pie that build muscles.

Or is it really that simple? While I doubt players really knew what they were putting in their bodies, I doubt they really thought they were just eating more carrots to improve their vision – a guy sold them a “spray” that is claimed to work wonders and not be detected by blood tests (life tip: if “not being detected”is part of the advertisement, it probably is illegal).

Obviously it is more unethical for Key to throw his deceived clients under the bus for his own benefits (it worked), but what about the athletes? Is it really “cheating” when your sketchily obtained “nutrition supplement” doesn’t provide you any advantage – and you just think it does? Most people won’t consider moms telling their kids to eat large broccoli to be an unfair advantage, so what about these undetectable nutrition supplements? If they should be punished, what are the punishments for experiencing the placebo effect?

P.S. Random, but this topic reminds me of rhino hunting