By Amanda Lewellyn and Alex Zrenner 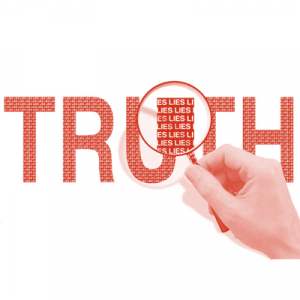 The truth is more complicated now than it’s ever been.

In the past, the word truth meant that the statement couldn’t be argued. But today, in the midst of one of the strangest presidential elections in history, every fact has become debatable.

Regardless of what independent fact-checkers report, partisan pundits problematize the truth–not to mention the morality and context–behind the facts. We can even see it in the political ads: this election, there’s a focus on emotional rhetoric and not factual arguments.

With this growing tension between fact and feeling, the electorate is left to question how we’re supposed to know whether candidates’ claims are truth, lies, or something else entirely.

Let’s look at that disconnect from an economic perspective: according to the Democrats, we’re recovering from the 2007-2009 recession, and the economy is growing.

But according to Trump (and some Republicans), the economy is failing. China, globalization, and immigration have taken all of our jobs and everyone is out of work.

Who’s right? That depends on who you ask.

According to a number of economic measurements, the Democrats are right. The unemployment rate is now at five percent, a major improvement from its staggering 10 percent peak during the 2007-2009 recession. The stock market has reached record highs in 2016. We have almost zero reason to fear an impending recession in the U.S.

But Republicans also have reason to believe that the economy isn’t as healthy as the Democrats say it is. The unemployment rate is an arbitrary but established measurement of economic labor performance. It is the fraction of people who have a job to people who have a job AND are actively seeking work. Any person who stopped searching for work isn’t factored into this measurement. Which means there may be a significant portion of the country that isn’t working (and isn’t looking, either).

Translation: the truth here is fraught. From a zoomed-out point of view, sure, the Democrats are right in saying that the economy on the whole is getting better. But there is reason to believe that a nonrandom group of people are not experiencing that economic recovery.

Just outside of St. Louis, there was a factory that manufactured Chrysler cars. It was shut down during the 2007-2009 recession. Now, all the factory line workers are out of a job, and everyone they knew from the factory is, too. In a workforce that is increasingly skilled and an economy that’s moving toward clean energy, those factory workers now lack the qualifications to participate in the type of jobs that American leaders are working to produce: jobs in fields like solar energy and technology production.

In other words: from those factory workers’ perspective, the Democrats’ summary of the “growing” economy does not reflect their experiences. It’s just not their truth.

That’s not to say that the Democrats are wrong or ill-intentioned, either. A five percent unemployment rate is a great sign for the economy, and the losses of factory and coal jobs are an unfortunate opportunity cost of transitioning to a clean and sustainable economy. We should create programs to ease the transition, but that’s a conversation for a later date.

So is it the statistic or the experience that defines the truth? We don’t have an answer to that. We don’t think anyone does.

What we do know is that regardless of the outcome of this election, many people will believe that the majority ignored their truths. It is the responsibility of the next leader of the country to find a way to include those voices in the creation of national policy.