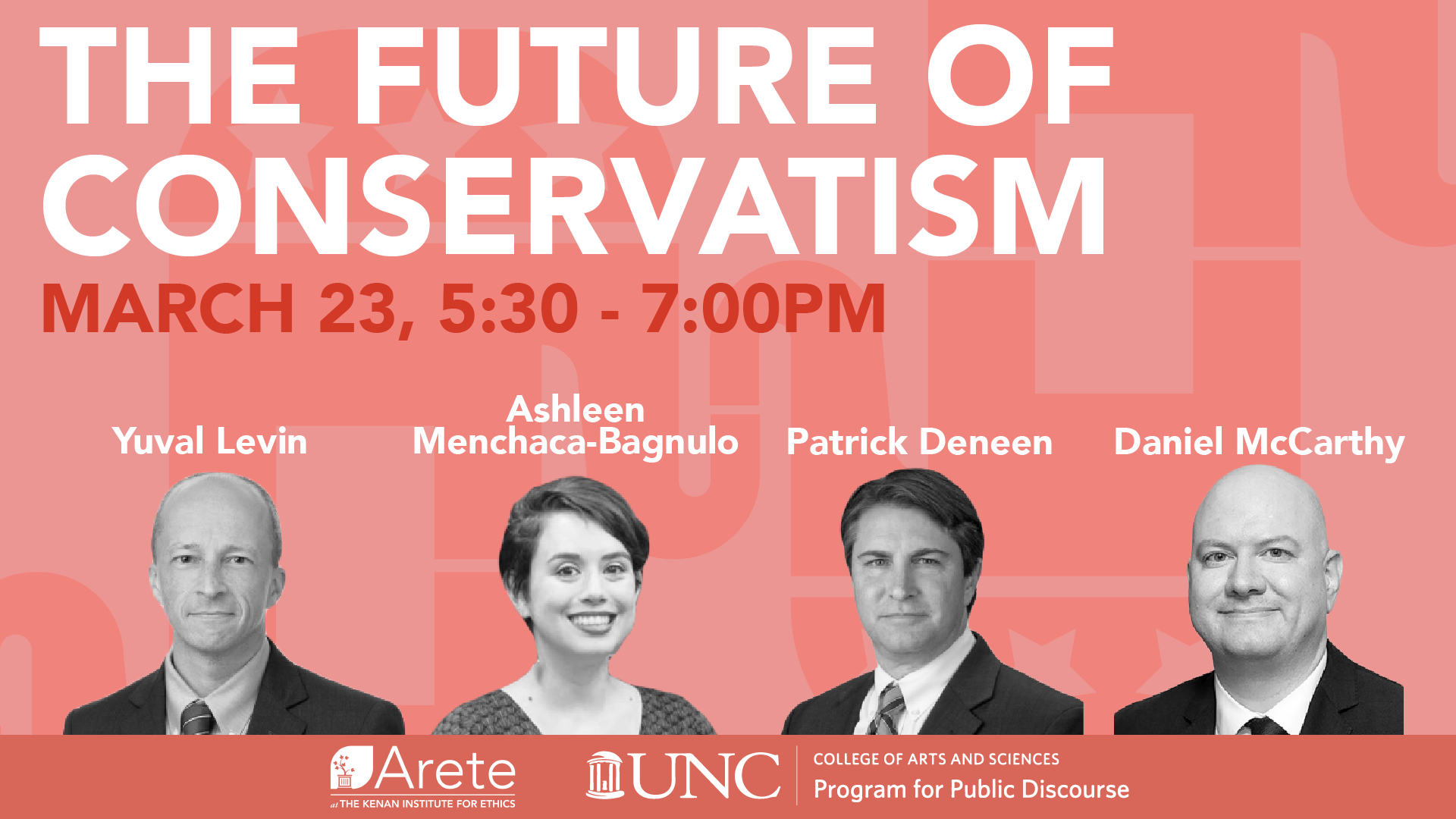 Conservatism in America has an uncertain future. On a host of issues including populism, free trade, and nationalism, conservatives are no longer united. Now, perhaps more than ever, what it means to be a “conservative,” where conservatism is likely headed, and where, ideally, it should direct itself are open to debate. A panel of political thinkers with different views on conservatism will discuss these critical questions.

Patrick Deneen, PhD is a Professor of Political Science and the David A. Potenziani Memorial Chair of Constitutional Studies at the University of Notre Dame. He has previously taught at Princeton University and Georgetown University. Deneen has published several books on American political thought, including Why Liberalism Failed (2018) and Conserving America? Thoughts on Present Discontents (2016).

Before transitioning to education, Patrick Deneen was Speechwriter and Special Advisor to the Director of the United States Information Agency. He was also awarded the American Political Science Association’s Leo Strauss Award for Best Dissertation in Political Theory in 1995 and an honorable mention for the organization’s Best First Book Award in 2000.

Yuval Levin, PhD is the director of Social, Cultural, and Constitutional Studies at the American Enterprise Institute. As director, he studies the foundations of self-government and the future of law, regulation, and constitutionalism while also exploring the impact of social and political life on the American family. He is also the founding and current editor of National Affairs, a senior editor of The New Atlantis, and a contributing editor to National Review. Previously, Levin served as a member of the White House domestic policy staff under President George W. Bush and was the President’s Council on Bioethics’ executive director.

His most recent published works include A Time to Build: From Family and Community to Congress and the Campus, How Recommitting to Our Institutions Can Revive the American Dream (2020).

Daniel McCarthy is the editor of Modern Age: A Conservative Review, published by the Intercollegiate Studies Institute. He also serves as the director of the Robert Novak Journalism Fellowship Program at The Fund for American Studies and is a visiting fellow at the Center for the Study of Statesmanship at The Catholic University of America. Before joining Modern Age, McCarthy was the editor of The American Conservative.

McCarthy’s writings have been published by various news organizations including The New York Times, USA Today, The Spectator, and the National Interest.

Jed Atkins, PhD is director of the Arete Initiative at the Kenan Institute for Ethics at Duke University, where he is the E. Blake Byrne Associate Professor of Classical Studies and Associate Professor of Political Science. Additionally, Dr. Atkins teaches in Duke’s Visions of Freedom Focus Cluster, which offers courses designed to develop a critical understanding of various competing conceptions of freedom and their historical origins. He received his PhD from the University of Cambridge.

An expert on Greek, Roman, and early Christian moral and political thought, Dr. Atkins is the author of Cicero on Politics and the Limits of Reason (2013), Roman Political Thought (2018), and co-editor of the forthcoming Cambridge Companion to Cicero’s Philosophy.