The Ethics of Now: Racism, Police Violence, and Protests 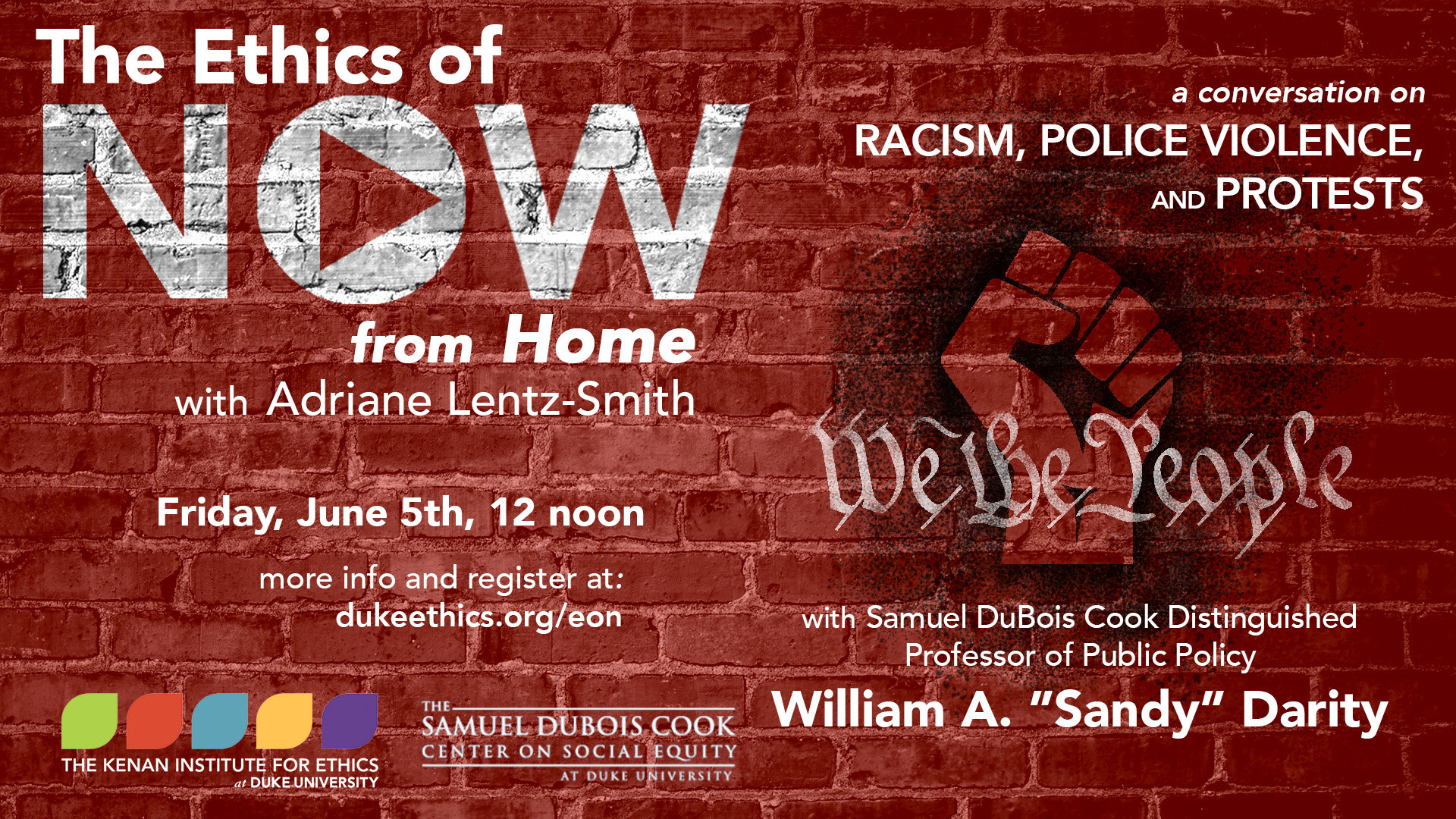 The Ethics of Now with Adriane Lentz-Smith continues from home with a series of brief, thoughtful and timely conversations about the ethical dilemmas of this historic moment.  In this special lunch-hour conversation, join Professor Lentz-Smith and the Samuel DuBois Cook Distinguished Professor of Public Policy William A. (“Sandy”) Darity as they discuss the national response to George Floyd’s murder, protests and riots, police violence, and where the nation might go from here.  Cosponsored by the Samuel Debois Cook Center on Social Equity.

After registering, you will receive a confirmation email about joining the webinar.

Darity’s research focuses on inequality by race, class and ethnicity, stratification economics, schooling and the racial achievement gap, North-South theories of trade and development, skin shade and labor market outcomes, the economics of reparations, the Atlantic slave trade and the Industrial Revolution, the history of economics, and the social psychological effects of exposure to unemployment.

He was a visiting scholar at the Russell Sage Foundation (2015-2016), a fellow at the Center for Advanced Study in the Behavioral Sciences (2011-2012) at Stanford, a fellow at the National Humanities Center (1989-90) and a visiting scholar at the Federal Reserve’s Board of Governors (1984). He received the Samuel Z. Westerfield Award in 2012 from the National Economic Association, the organization’s highest honor, Politico 50 recognition in 2017, and an award from Global Policy Solutions in 2017. He is a past president of the National Economic Association and the Southern Economic Association. He also has taught at Grinnell College, the University of Maryland at College Park, the University of Texas at Austin, Simmons College and Claremont-McKenna College.

His most recent book, coauthored with A. Kirsten Mullen, is From Here to Equality: Reparations for Black Americans in the 21st Century (2020). Previous books include For-Profit Universities: The Shifting Landscape of Marketized Education (2010) (co-edited Tressie McMillan Cottom), Economics, Economists, and Expectations: Microfoundations to Macroapplications (2004) (co-authored with Warren Young and Robert Leeson), and Boundaries of Clan and Color: Transnational Comparisons of Inter-Group Disparity (2003) (co-edited with Ashwini Deshpande).He has published or edited 13 books and published more than300 articles in professional outlets.