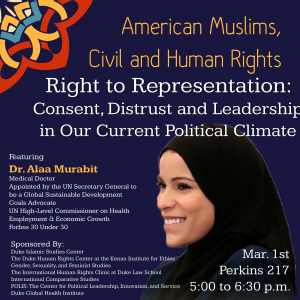 The Duke Islamic Studies Center, along with the Duke Human Rights Center at the Kenan Institute for Ethics, will host its keynote event on March 1st, as part of the “American Muslims, Civil and Human Rights” series, which examines the current human rights crisis for Muslims in the U.S.

Alaa Murabit is a medical doctor, one of 17 Global Sustainable Development Goal Advocates appointed by the UN Secretary General, and a UN High-Level Commissioner on Health Employment & Economic Growth. Her efficacy in security, health policy and sustainable development was most recently recognized by Forbes, Aspen Ideas and Bay Street Bull who named her a 2017 Forbes 30 Under 30, Aspen Institute Spotlight Scholar, and Canada’s 30×30respectively. Her leadership in global policy and in elevating the role of women, particularly young, minority women, on global platforms was recognized by Harvard Law who named her the youngest 2017 Woman Inspiring Change.

This event is open to the public.