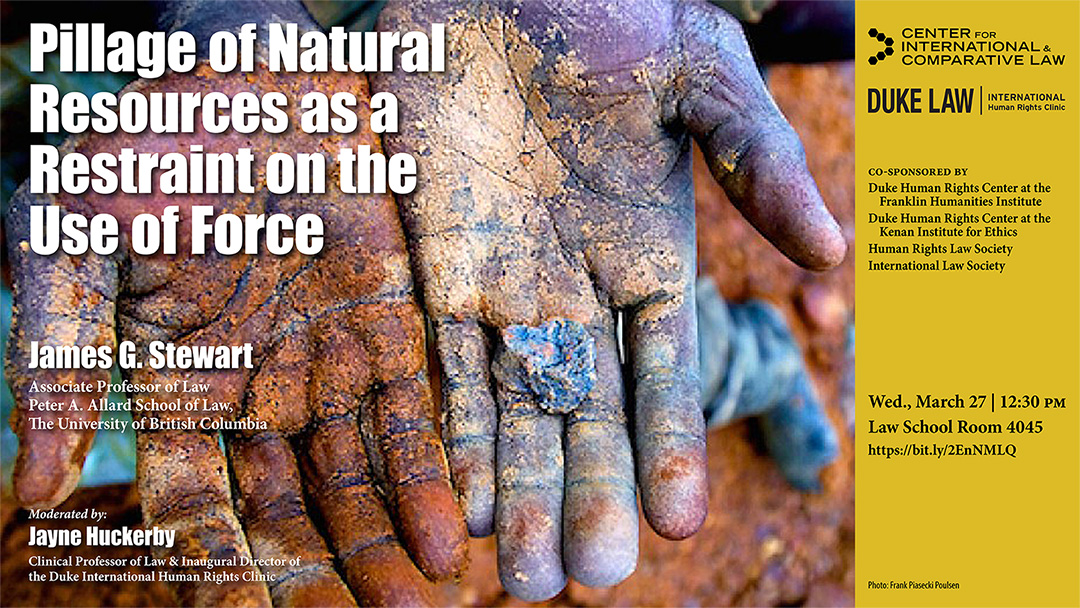 Professor James G. Stewart, Peter A. Allard School of Law, The University of British Columbia, will discuss the issue of the pillage of natural resources as a restraint on the use of force.

The event is free and open to all, no registration required. Lunch will be provided. For more information, please contact Balfour Smith at bsmith@law.duke.edu.

James G. Stewart, Associate Professor of Law, Peter A. Allard School of Law, The University of British Columbia, has spent the past eighteen years working in international criminal justice, as either a practitioner or a scholar. He joined the UBC Law Faculty in August 2009, after spending two years as an Associate-in-Law at Columbia Law School in New York. Prior to Columbia, he was an Appeals Counsel with the Prosecution of the United Nations International Criminal Tribunal for the former Yugoslavia. He has also worked for the Legal Division of the International Committee of the Red Cross and the Prosecution of the International Criminal Tribunal for Rwanda.

Prof. Stewart’s principal scholarly interests and current research projects include work on the relationship between atrocity, commerce, and international criminal justice. His scholarship has been translated into French, Spanish, Russian, and Arabic and cited by the International Criminal Tribunal for Rwanda, The Special Court for Sierra Leone, the United Nations Special Tribunal for Lebanon and the International Criminal Court. Among other distinctions, Prof. Stewart’s work on unlawful confinement at Guantánamo received the La Pira Prize, and his ongoing work on the liability of corporate actors for international crimes received the Cassese Prize.

A graduate of the University of Wellington, New Zealand, with degrees in both law and philosophy, Prof. Stewart also received his Diplôme d’études approfondies in international humanitarian law at the Université de Genève as a Boursier d’excellence de la Confédération suisse and a JSD at Columbia Law School. He has also been a Fellow with the Open Society Initiative and a Global Hauser Fellow at New York University Law School. In June 2019, he will lecture on history and the future of international criminal justice at the Collège de France in Paris.