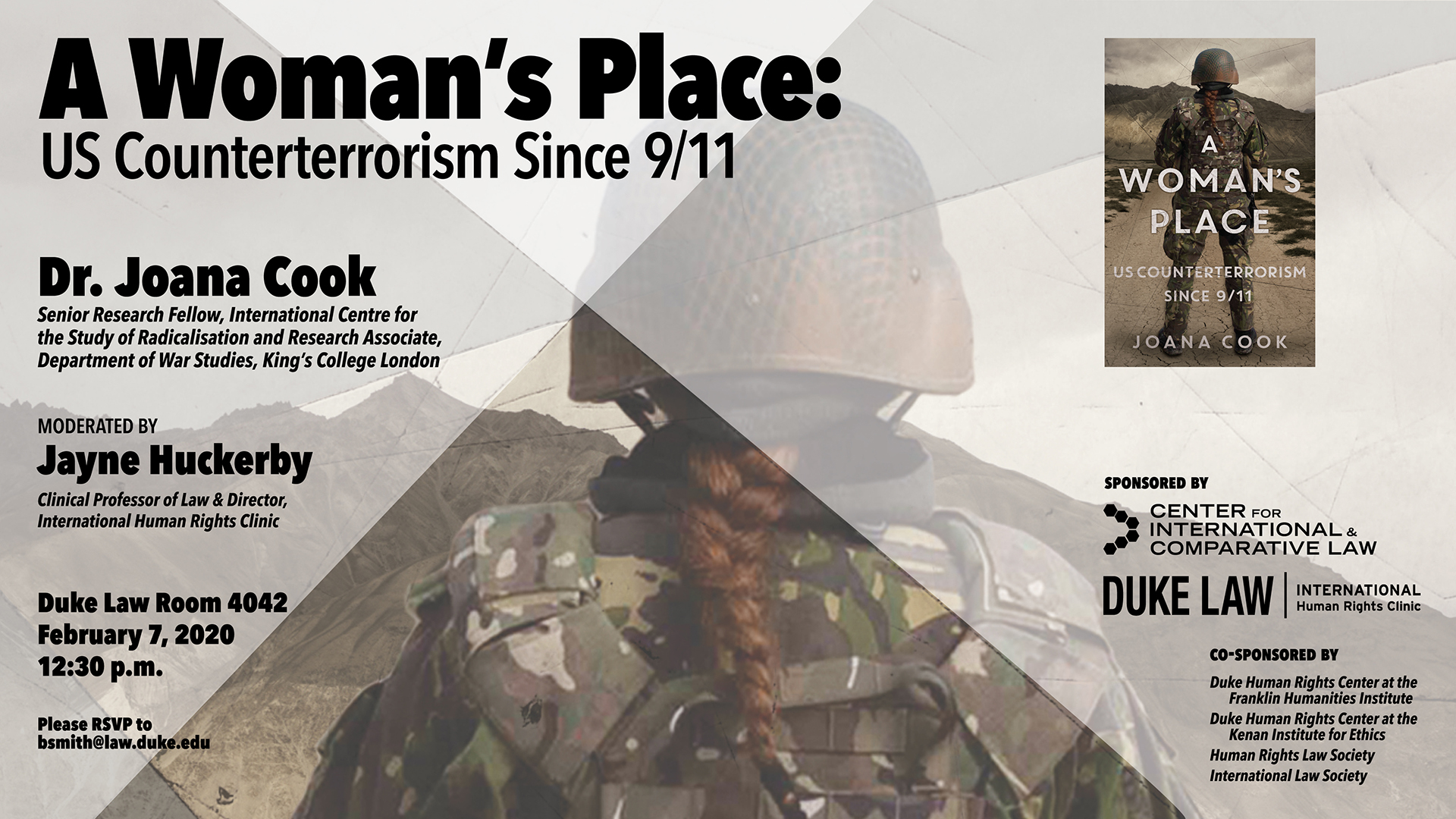 Lunch will be served

The 9/11 attacks fundamentally transformed how the US approached terrorism, and led to the unprecedented expansion of counterterrorism strategies, policies, and practices. While the analysis of these developments is rich and vast, there remains a significant void. The diverse actors contributing to counterterrorism increasingly consider, engage and impact women as agents, partners, and targets of their work. Yet, flawed assumptions and stereotypes remain prevalent, and it remains undocumented and unclear how and why counterterrorism efforts have evolved as they did, including in relation to women.

Drawing on extensive primary source documents, “A Woman’s Place” traces the evolution of women’s place in US counterterrorism efforts through the administrations of Presidents Bush, Obama, and Trump, examining key agencies like the US Department of Defense, the US Department of State, and USAID. In their own words, Joana Cook investigates how and why women have developed the roles they have, and interrogates US counterterrorism practices in key countries like Iraq, Afghanistan, and Yemen. Analysing conceptions of and responses to terrorists, she also considers how the roles of women in Al-Qaeda and Daesh have evolved and impacted on US counterterrorism considerations.

The event is free and open to all—but space is limited and an RSVP is required. Lunch will be provided (first-come, first-served). For more information or to RSVP, please contact to Balfour Smith at bsmith@law.duke.edu.

Dr. Joana Cook is Senior Research Fellow at the International Centre for the Study of Radicalisation, and a Research Associate in the Department of War Studies, King’s College London. Her research more broadly focuses on women in violent extremism, countering violent extremism, and counter-terrorism practices. Her PhD examined women in relation to post-9/11 U.S. counterterrorism responses in Yemen and the wider MENA region.

Joana is also a Research Affiliate with the Canadian Network for Research on Terrorism, Security and Society (TSAS), and a Digital Fellow at the Montreal Institute for Genocide and Human Rights Studies (MIGS), Concordia University. She has previously worked with Public Safety Canada’s Research Affiliate Program (Kanishka); as Editor-in-Chief of Strife based out of the Department; and as a journalist in Canada and southern Africa.

She has presented her research to senior government and security audiences in a number of countries, and at institutions such as the UN Security Council, NATO, the Parliamentary Assembly of the Council of Europe, Oxford and Cambridge. She has also been featured in media such as Time, The Telegraph, the Huffington Post, The Washington Post, The New York Times and on BBC World News, CNN, Sky News, BBC Radio, the National Post and CBC. In May 2019 she did her first TEDx talk on women in security today.

She holds a BA in Political Science from the University of Regina, an MA in Conflict, Security and Development, and PhD in War Studies (both from King’s College London). In 2016 she was a recipient of the Canadian Centennial Scholarship Fund (CCSF).