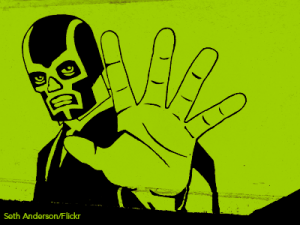 As an Asian-American student at Duke, I have been asked my opinion about the K-Sig “Asia Prime” party by friends, professors, and even my grandmother from China.

Rather, what I want to draw attention to are the flyers tagged with “#racistrager,” which used photos from the party itself. These pictures have gone viral on the internet.

A Duke Student complained on the Rally for an Inclusive Duke Facebook page (now shut down) that although the faces were whited-out, the Asian American Alliance’s decision to plaster the flyers all over campus and the internet harmed the individuals portrayed because they were still recognizable.

This brings me to my question: what are the acceptable limits of social shaming on the internet? Should we embrace social media as a form of vigilante justice? Here are four case studies for you to decide.

Case 1: Pastor gets into holy trouble

An irate pastor refused to tip 18% at an Applebee’s lunch following the Sunday service. On the receipt, she crossed out the mandatory gratuity for parties larger than 6, and wrote “If I only give God 10%, why do you deserve 18?”

The upset waitress showed her friend who then showed the world via Reddit. The result? A mortified pastor and an extremely angry public. Is this evil? Justified? Justified evil?

Case 2: Cameron Crazies are the devil

Following Duke’s alleged chant, “How’s your grandma?” at the game against NC State, an online jokester (or seriously offended NC State fan) created a White House Petition to label the Cameron Crazies as “a terrorist organization.”

How seriously should this be taken? The number of signatures may attest to this…
[poll id=”3″]

The organization, Hollaback, seeks to empower women and to combat sexual harassment. On this page, women are encouraged to post about their encounters, and other members provide support by clicking the button, “I got your back!”

Recently, some women, in addition to posting about their experience with sexual harassment, have taken pictures of their harasser.

Is this form of public shaming empowering? Is the internet an appropriate avenue to hold these men accountable?
[poll id=”4″]

Case 4: Hey girl girl, did you know… about “Slut Shaming”?

Is this social satire, or cyber bullying? NPR (and public opinion) agree with the latter.

In the age of social media, the internet has become an instrument to deal with our everyday woes and injustices. Although powerful, the internet is a double edged sword. How we use this vigilante justice should be a concern for all.
[poll id=”5″]

Leave a comment on which case you find justified or unjustified!