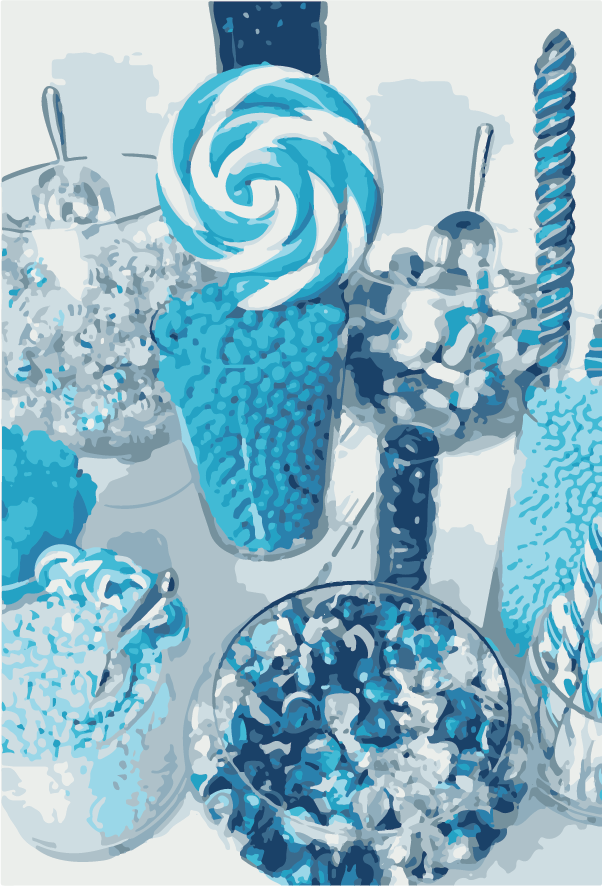 I love blue candy. I don’t mean I love whatever flavor blue is supposed to signify, I mean I love candy that is blue. Because it is blue. I love blue candy the way gardeners love the Himalayan Blue Poppy, a poppy so blue it looks unreal. Something in my brain giggles and fizzes when I bite into blue gummy dinosaurs, acidic-blue frogs, blue M&Ms.

This color preference is the result of a combination of international travel, national regulation, and risk perception. When I was growing up in Norway, blue candy was not allowed. The compound that makes candy blue is carcinogenic in high doses, and this was considered a significant enough risk that the dye could not be added to food sold in Norway.

The regulation of food dyes was different in the US, where blue candy was plentiful. If you were lucky enough to have a relative that lived in the US, commonly known as an “America uncle”, or a parent who travelled for work and was willing to buy you treats, you could have blue candy. I did not have an America uncle or a parent who bought me candy in the US, but I had friends. Friends with blue candy. I remember licking lollipops that turned my tongue azure, feeling both excited and a little worried. The experience combined sugar with the thrill of doing something rash. Irresistible.

Blue candy is not a major topic in ethics and blue candy is now allowed in Norway. It turns out you have to eat ridiculous amounts of blue dye for it to do you any damage. The sugar will kill you before the dye does. My sense that blue candy is both delicious and dangerous depends on my age, my geographic location, and my parents’ determination to limit my intake of high fructose corn syrup.

That said, blue candy is an illustration of the words on Kenan’s website, “Ethics matters everywhere.” Risk management is about ethics, and so is regulation of what goes into our food. Many people now feel that our food is not sufficiently regulated, that the antibiotics, pesticides, and hormones in our meats and plants are damaging to human health and the environment. Similar concerns about food dyes determined what hues of candy my childhood self could buy at the store. The purpose was of course to protect the health and safety of Norway’s population. The actual result: a grown woman who can’t resist blue candy.