The Power in Community Based Work

Hailing from Oakland, California I am fundamentally shaped by the Black Panther Party. Their legacy lives on within every aspect of the culture within my city. From activism to coalition building, to promoting community-based services, Oakland continues to think about what does it mean to say: all power to all the people? I even ran into Angela Davis, though not directly a Black Panther, one weekend at the farmers market in middle school.

Often, when individuals think about changemakers, they compare Martin Luther King Jr. to men like Malcolm X. People make a clear distinction between those who operate within the system and those who operate outside of the system. Every day, I am torn between thinking about the best way to affect change. It is the reason that I am a Public Policy major at Duke but it is also the reason that I am deeply influenced by the Black Panther Party and have engaged in many community-based programs in my hometown.

When I was younger, my mom forced me to read every book, attend every museum exhibit, and watch every movie that touched on historical Black figures and their fight to lead movements to affect change. Because of this, at a young age, I constantly had conversations with myself about whose strategies were best? Was Nat Turner’s rebellion more powerful than Harriett Tubman’s plight to save enslaved people? These questions of fighting within the system, or quite literally burning down the system and killing those within, such as Nat Turner did, have always served as a constant tension. However, despite being exposed to so much, I could never shake the influence of the Black Panther Party. The power in the Black Panther Party was their dedication and determination to invest in the people, and that fundamental belief is something that guides all my work. I believe that the most marginalized are the experts of their own experiences, and we must listen to them for the solutions. The Black Panther Party showed the importance of listening, but also springing to collective action. Black people were being assaulted by police officers? Fine. We have the right to bear arms and we will police the police. Low-income Black children are not being fed? Fine. We will feed them before school through a community breakfast program. The newspapers and school systems are not adequately representing, reporting, and educating us? Fine. We will create our own. Time and time again the Black Panther Party fought to have the needs of the community met. They not only were powerful in Oakland but they were responsive to the needs of Black people all across America until they were steadily dismantled by COINTELPRO.

When I think about where I want to disturb the system, I am still unsure, but I think that I want to bridge policy and community-based programming. So often, politicians propose policies without engaging the stakeholders most relevant to the problem. As a policymaker, I want to think about how we bring community-based programs and groups responding to the problems on the ground to the table so that they can have a say in the problems affecting their communities. In addition, I also want to think about the implementation process. Once a policy has been approved, I want to engage with diverse stakeholders to think about how we can implement, sustain, and evaluate policies that are both community-centered and community-responsive. For me, that is the best way to balance the teachings of the Blak Panther Party with my knowledge of the importance of Public Policy. 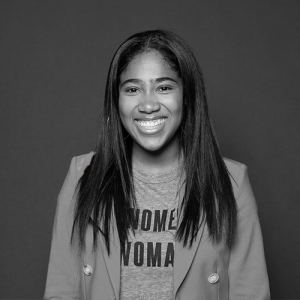 Gabrielle Battle is a second-year student from Oakland, California, majoring in Public Policy. She is deeply passionate about racial justice and has worked to advocate for marginalized communities, both in her hometown and at Duke. On campus, she is involved in the Black Student Alliance’s Advocacy and Caucasus Committee, and she recently served on the Presidential Council on Black Affairs. She also serves as a research assistant for the Last Child Project at the Kenan Institute, as well as a research assistant at the Wilson Center for Science and Justice at Duke Law School.

All posts by Gabrielle Battle