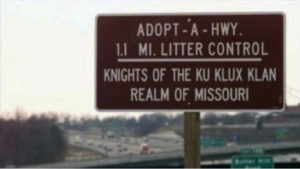 So here’s the briefing:

The KKK wants to adopt a highway in Georgia; the court said no, and now the KKK is suing.

And many people are upset about many things.

A similar case has happened before– the KKK in Missouri was able to adopt part of the highway after Missouri’s state rejection was rejected by the Supreme Court in 2005. Though the KKK sign was sawed down twice and the highway was later renamed as the Rosa Parks Highway.

In the Georgia case, however, the application was denied because the state court believed that “promoting an organization with a history of inciting civil disturbance and social unrest would present a grave concern” and could “have the potential to negatively impact the quality of life” of people in the county and state. The court further concluded that the sign would be a distraction to motorists.

At his point I am sure you are curious, so here are some interesting adopt-a-highway signs.

Some of these adopt-a-highway signs are very distracting in my opinion. Yes, the KKK has a racist and violent past*, but using this as a basis for the judging seems subjective and there certainly are organizations that fall in the grey area.

Does the state government have the right to determine what sign is “too offensive” to be posted? It definitely has the obligation to protect the minority, and like Christian suggested, driving pass a KKK sign everyday is extremely uncomfortable for African Americans. But to what degree should the government protect the offended? Should the government step in for Confederate signs in a black community? Or crusade signs in a Muslim suburb? Communist signs for veterans from the Vietnam War? Or planned parenthood in a conservative Christian community? Or pro-gay right organizations in say, my home state Alabama?

This also begs the question: What is the ethical implication of denying groups like KKK the right to clean roads for free? We don’t mind jailed criminals cleaning our streets – and the fact that KKK is offensive to the majority of the people should not be a reason why they shouldn’t be able to represent their views. At the same time, we don’t allow offensive license plates either (“KKK” will most certainly be denied as a license plate).

The KKK claims all they want is to clean the roads, though if they really want to do that, they wouldn’t be asking for a sign. The spokesman also maintained that they just wanted to use this as another way to assist the community (the word “another” is quite alarming). But if all we know is that an organization wants to adopt a highway, it’s hard to say no basing solely on the offensive claim.

Because of freedom of speech, Westboro Baptist Church can protest legally outside of veteran funerals and American Nazi Party can stage peaceful marches with police protection. It is extremely difficult to accept some of the resulting actions, but such is the negative consequence of freedom of speech. So why can’t KKK adopt a highway?

* KKK has changed their stance to white loving instead of color hating, do I believe that and do I think that is a legitimate thing? No, but that is their official stance.