The Death of a Hamster 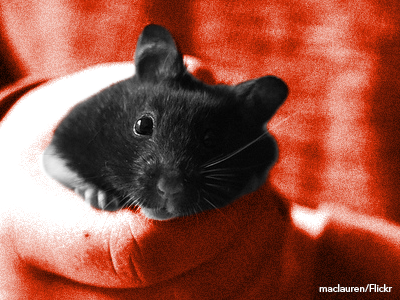 Last year at June, an angry 19 year old teenager choked and threw a hamster out of the house and killed it instantly, and about three weeks ago, she was arrested and charged with aggravated cruelty to animals and faced up to two years in prison. I was pretty horrified when I first heard of this, and judging from some of the comments I’ve read from various blogs, the public seems indignant at what she has done.

There is probably not much debate on whether her action was humane or not, what I think really is worth talking about is Mark Bittman’s response in the New York Times. Bittman argues that we torture animals everyday in meat factories and we make it okay because we eat the animals (warning: he included some really graphic videos). The fact that a teenager is charged with a federal felony for killing a hamster while industries get away with grinding up 200 million chicks alive in a year is something that really troubles me.

Humans as a species have succeeded in evolution so successfully that we are hands-down on the top of the food chain. We have the ability to eat what we want and the power to bring many species of animals to extinction if we want to (or even when we don’t want to). We rarely have to worry about being overpowered by other animals, and as cliché as this sounds, we have the responsibility to go along with the power we have to make ethical decisions. I am by no means telling people to all turn vegetarians or vegan (I am definitely not one), but I think it is important to think about what makes mass killing animals for food okay and killing one hamster not.

How do we decide which animals are more important than others? Do we base it on the intelligence of the animals? (I’m pretty sure that pigs are smarter than hamsters.) The ability to perceive pain, death, or self-identity? We can buy rat poison in stores, but killing a pet mouse via poison would be animal torture, how do we explain that? Why is it socially acceptable to eat certain non-endangered animals and unacceptable to eat others?

It seems like the “purpose” of the animals is all that matters to humans instead of what species they are, and that seems to me a very subjective line and in a way, an irresponsible way to define things. I think the ultimate question comes down to how to balance human needs and wants with those of other living beings.