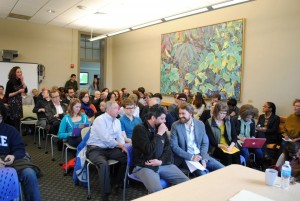 Due to the constant stream of events and programming that the Kenan Institute orchestrates, I’m an old pro at rearranging and reconfiguring our space. Even I was astounded Monday night at the number of people we squeezed into the room for a talk with James Scott. (That’s me standing up in the picture, pondering where to put another body!)

We knew he was deserving of a large audience, and he did not disappoint. Scott is currently the Sterling Professor of Political Science, Professor of Anthropology, and Director of the Agrarian Studies Program at Yale University. Widely acclaimed in various fields, one of our graduate fellows expressed excitedly that it was like having an academic superhero come visit!  As this recent New York Times article shows, he also blends his scholarship with an agrarian lifestyle, living on a 46-acre farm and claiming that one of his biggest accomplishments is knowing how to shear a sheep.  Having read the article, I was not surprised to find him tending to the potted plants in our coffee room when he was breaking there during the day. His down to earth personality was refreshing and made me appreciate his talk even more.

The topic was a recent book on stateless peoples in the highlands of Southeast Asia called The Art of Not Being Governed: An Anarchist History of Upland Southeast Asia.  We have a brief summary on our website. It was interesting to have this conversation while we also had the Nowhere People photography exhibit displayed in the hallway.  That effort by photographer Greg Constantine is meant to reveal the impact of statelessness on people and communities who find themselves excluded from society by forces beyond their control. (This is the last week to view Nowhere People before we make room for the What Is Good Art? Installation, so come check it out if you have not yet had a chance.) In the cases Constantine documents, though, the exclusion, the pushing out, the lack of citizenship is for the most part unwanted. People may be deeply tied to a place but are not allowed to fully claim it. Scott, on the other hand, was describing the intentional fleeing of the oppressions of state-making processes, a deliberate and reactive statelessness. He contrasted “hill” people versus “valley” people, the lifestyles that accompany these and other geographies, and the ways the combination of geography and lifestyle can help or hinder state encroachment. If you look longitudinally, migrations to the hills coincide with specific state-making processes—losing rebel factions, those feeling oppressed, or those with some sort of unorthodox practice all want to flee the state. The state wants control of its people; a provocative illustration of this point: have you ever thought about how great walls or barriers built around civilizations might be meant not only to keep “barbarians” out, but to keep taxpayers in?

Both of these scenarios of statelessness call into question the ways in which institutions of the state can be helpful and harmful. We tend to think of the rights of citizenship and the protection of the state to be of the utmost value. And thus, the problem of displaced peoples is that of exclusion. But what if those rights are unwanted by others? What is the costs of state “protection” outweigh the benefits?