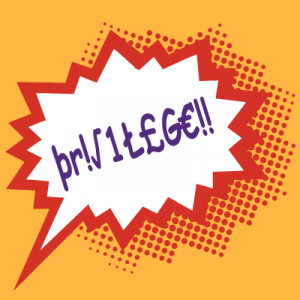 Privilege isn’t something that people want to admit they possess. It’s uncommon for someone to actively acknowledge their own privilege, and when pointed out, it can be seen as a negative, something bad that must be fixed. Yet why is that the case? Why is it that privilege has became a word that people don’t want to be associated with?

Privilege, according to The Oxford Dictionary, is “a special right, advantage, or immunity granted or available only to a particular person or group.” This means that I, a white, cis-gendered, heterosexual female who attends a top-ten university, go about life with advantages that others who are not a part of these groups or identities do not possess. However, as a low-income, first generation college student, I also am aware of the privileges I am not granted when it comes to access to resources, understanding of the college system and how to navigate the complexities of the university. To admit to having privilege is to admit that there are historic and persistent systems of inequality and oppression in our community. But does that stem from the word itself, or something bigger? Which is it that we dislike: privilege itself, or what privilege represents and upholds?

One can argue that there are different types of privilege, such as going to Duke or a similar university. The privilege of attending a top ten institution comes with the selectivity and competitiveness of the applicant pool, a positive opportunity that is meant to highlight a student’s individual academic merits. However, applying to Duke in the first place and having an application read and acknowledged itself is not awarded to all. This is where the problem of privilege arises. Students don’t start off equally from the start of the application, being judged not by their academic achievements and merit, but by the groups that they are a part of and identities they possess. Privilege permeates a process that is designed to be fair, unbiased, objective. Applicants are being awarded not for their academic accomplishments but for the groups and identities they are a part of. College institutions are awarding excellence that is a result of access to specific resources and membership of specific groups.

These judgements are usually done unconsciously since all humans have inherent biases which can extend beyond education, to employment opportunities, housing, living, and so forth. Some steps have been taken to stop these judgements and biases, like need-blind admission, using numbers and codes to replace students names and identities during the application process, but we are nowhere near an “equal opportunity” society that solely looks at a candidate for their achievements.

Because factors like race, gender expression or identity, socioeconomic status and others continue to be used to discriminate and prevent individuals from having equal opportunity, the first step to further prevent this is to acknowledge privilege. Privilege itself isn’t the “bad word” – it is what it represents and upholds. To be cognizant of the privileges we have will allow for individuals to think critically of how we can get others to have an equal chance at these opportunities. In the college application process, It is not that competition and selectivity should go away, but rather there needs to be equal opportunity for everyone, based solely off of criteria that are unbiased and fair.

For the problem that privilege presents overall, the specific areas need to be addressed in their own way- privilege in housing looks different than privilege in education and how we go about dismantling that privilege to create equal opportunity will be specific to that area. To openly acknowledge our privilege is the first step in recognizing the systemic inequalities that pervades our communities. But go further than acknowledging, take action where you can however small it may be, do something to change the system. Privilege, the word- shouldn’t be seen as taboo to say, it’s not a bad word. Privilege should be said time and time again when it is present because when we realize the advantages that we have, and the opportunities not awarded to others because they don’t have these advantages, we take a small step forward in trying to dismantle inequality in our society.