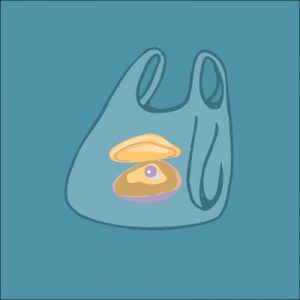 I’ve never been a picky eater, and one of my favorite food groups is seafood, from sashimi to all sorts of cooked shellfish. So when I scrolled across Facebook and saw a video where a guy was eating oysters, I continued to watch, thinking it was your usual cooking/food video. However, a few seconds later, the screen panned to a research lab setting with the dissection of an oyster and a microscopic screen with tiny plastics inside the flesh.

I quickly realized that it wasn’t a cooking video, but rather a short environmental documental video from NPR titled “How Much Plastic Do You Want in Your Oysters and Clams?” Everyone who knows anything about the environment knows that plastic production and consumption have trashed our planet for the worse. I knew how incredibly destructive plastic is to our planet, as demonstrated by the numerous plastic patches across our oceans and congregated in ocean gyres. Nonetheless, it was again shocking and saddening to reflect on how the rampant consumption has reached a point where the clams and oysters we eat would now include a delightful side dish of microplastics.

Perhaps it was the specific focus on the fact that it was microplastics, rather than larger chunks of plastic, that caught me off guard. The National Oceanic and Atmospheric Administration defines microplastics as “small plastic pieces less than five millimeters long.” They come from various sources such as degraded larger plastic debris and microbeads that are made up of polyethylene plastic and added to exfoliants in health and beauty products. For example, the esthetician that I visit sells a cleanser that I don’t use with “polyethylene beads” included in the ingredients list. I have sent an email to them asking if they have any plans on phasing the use of the ingredient, especially as Congress passed the Microbead-Free Waters Act of 2015, requiring companies to stop using the microbeads in products by July 2017. (They replied back to me saying that “the ban on microbeads depends on which state it is made in and the manufacturer for the scrubs is in California which has a Jan 1st 2018 deadline on production, but a 2020 deadline on over the counter sales.” However, they will “[phase] over to non-microbeads in the [scrubs] as soon as [they] run out of [their] current stock.”)

In the video, the most common types of microplastics researchers have come across include little fragments, microbeads (commonly found in toothpastes and facial scrubs at the drugstore or grocery store), nurdles (resin pellets melted and formed into anything), and polystyrene beads (Styrofoam beads commonly sold as fake snow). Many of the microplastics contain fibers that are ingested by the ocean life organisms at the very bottom of the food chain, consequently affecting the entire food chain.

One of the more interesting and relevant, on an individual consumer level, insights from the video was how the clothes we wear and the use of washing machines exacerbated the problem. A single load of laundry can put thousands of microplastics into the ocean, as filters on washing machines and wastewater treatment plants simply aren’t currently equipped to filter out the miniscule microplastics from getting into water systems and our oceans.

What does this mean for us? My mom has always tried to buy clothing made of cotton, although mainly out of health concerns of clothing made of synthetic material. However, polyester is cheaper, making it difficult to tout the ethics of fashion for those who simply can’t afford more environmentally-friendly clothing material options. On a hygienic level, we can’t just not wash our clothes. These complexities in our clothing choices call for greater consumer responsibility to understand the impacts of what we’re wearing so we don’t wear down our planet for the worse.