In my attempt to cultivate the virtue of curiosity, I decided to have a chat with a friend of mine—we’ll call him Christopher. This might seem like a strange way to nurture my curiosity, particularly when I have been friends with Christopher for almost my entire life. What could I be curious about? I know practically everything about him. However, the one thing that we don’t talk about is politics; or at least politics broadly defined. So, I thought it’d be intriguing to ask him about his views on how the government should be run, and how individuals should operate within this economic system, specifically concerning people experiencing homelessness.

I was initially wary entering into this conversation as it was never territory into which we had ventured together. However, I trusted our built-up stores of goodwill towards each other and found that my trust was well placed. Additionally, as I was entering into this conversation with the intent to explore and grow in curiosity, I knew that I would not bring up any alternative positions. Thus, I truly was interested in his answers (even though I suspected they would, in many ways, differ from mine) and the process of how he came to hold those beliefs and convictions.

The actual conversation was refreshing. While there were times that I found myself biting my tongue so as to not share my own opinions, on the whole, I felt able to let myself be curious. In doing so, any moment where I may have felt myself wanting to provide a counterpoint instead resulted in a question that helped me understand more of the underlying framework for his response. Asking questions like, “Did you grow up believing that?”, “Were these topics of conversation at home/around the dinner table?” “How have your parents shaped your view on this topic?” or “Has anything happened to shape or change that view recently?” helped more fully flesh out the picture of Christopher that was being painted in this conversation. This last question in particular yielded the most insightful and interesting (for me) story that Christopher shared.

Immediately after graduating from college, Christopher worked at a Starbucks. At this specific Starbucks, he mentioned that there weren’t any employees who shared his beliefs both on a political-social level and on a philosophical-religious level. He knew this because everyone would speak openly about their beliefs through the headset intercom. This was the first time that Christopher had ever been exposed to such divergent views than his own and, in a sense, he was forced to listen. He said he wouldn’t ever share his own thoughts through the intercom, but through the process of listening to people share, began to understand why these people—people with whom he had never associated—think and act the way that they do. For Christopher, this helped soften his own beliefs and helped him empathize with people with whom he often finds himself disagreeing.

We can’t all sit down and have hour-long conversations (or have a headset strapped to our ear) with people who think about an issue differently than we do. But even just doing it once has helped nurture my sense of curiosity. This conversation helped me settle with the fact that having something you believe in—something you might have strong convictions about—problematized isn’t always a bad thing. Most of us have heard of the dangers of groupthink and the importance of the lone dissenter. But in our day-to-day lives, how often do we actually think about the ways that we surround ourselves with like-minded people. I currently find myself in a situation where almost all of the people I interact with have similar thoughts about most social issues. After my conversation with Christopher, however, I now feel galvanized to start seeking out more people in my life that will challenge my beliefs so that I might, if nothing else, grow in empathy and curiosity. 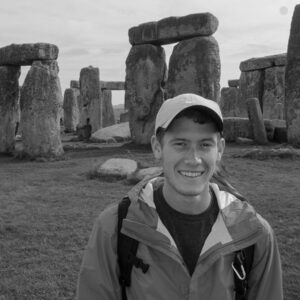