Nudity is Okay…Only after Dark 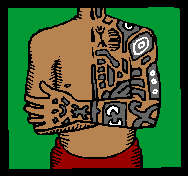 According to a recent Reuter’s article, a New York artist was arrested on lewdness and indecent exposure charges for painting (on) a nude model in the middle of Times Square.  His lawyer argued that that public nudity is acceptable in the name of art, and as a result, an interesting compromise has been reached.

Charges against Mr. Andy Golub (the artist) will be dropped if he agrees to:

First, what should be considered art?  Click on the following video to decide for yourself if Mr. Golub’s models constitute “artwork.”


Mr. Golub argues that painting nude bodies is more dynamic then painting a canvas.  For him, the nakedness of the model is essential to conveying his expression.  But, a line needs to be drawn on which cultural and moral taboos are “art” and which are simply bad taste and taboo.  For example, birth is a similar cultural taboo to nudity (it is not meant for public eyes outside of health class).  A recent Telegraph article, however, announced that an American artist was planning to sell tickets to this “private event” by staging the birth of her child as an “artistic performance” in a New York art studio.  If nudity is an acceptable medium of art, does giving birth also qualify?  Do the boundaries of art transcend those of social mores?

If we accept that painting new models is a legitimate form of artistic expression, then the issue becomes why it is necessary to enforce the “g-strings off after dark” rule.  The specificity of the agreement raises more concerns.  Is nudity inherently offensive even as a form of art?  Is nudity less offensive after dark?  Are certain body parts (breasts) more taboo to display then others (genitalia)?  Although some distinctions regarding nudity are normative, for example, a naked statue in public is less offensive than a naked human, the restrictions of this agreement seem arbitrary and very contrived.

Regardless of the New York statue, one thing remains constant: nudity has been and will remain a thematic element of art.  From Michaelangelo’s Thinker to Boticelli’s Birth of Venus, nudity has always made a striking artistic impression.  Perhaps in the light of the 21st century, the medium has advanced from canvas and marble to real human bodies.