My Parents and Trump 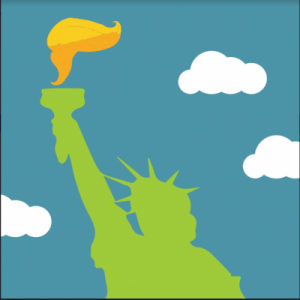 My mother was on the phone with me a few weeks before election day, talking about what it meant for our family to vote in this election, asking me to explain where each candidate stood on key issues. When I explained that Hillary would be looking to provide protection for undocumented immigrants, her immediate response was agreement: “I think we should protect them. Because we’re immigrants too.”

My family’s story is of course not uncommon. After all, America is supposed to be a country of immigrants. My father took up a job opportunity at the Cleveland Clinic, leaving China with my mother and sister and from then on calling the United States home. Eventually, they became naturalized citizens. But until the latest election cycle, my mother had never voted or been remotely politically active, despite becoming a citizen more than ten years ago, and having raised her family here for the past twenty. Her rationale is presumably that the outcomes of any major policy debates wouldn’t substantially affect us as Asian-Americans anyway, the kind of apathy commonly seen within the East Asian immigrant community.

But suddenly, different narratives were emerging. One narrative was represented in my mother’s response, a response of empathy and solidarity based in the shared experience of coming to this country in search of something better. The other narrative belonged to the classic model minority, the immigrants that had the means to come to this country “legitimately” and want to hold illegal immigrants to the same standards. It’s a sentiment often fueled by colorism within Asian communities and the rhetoric of fear and need for national security.

On election day, my heart was warmed by friends posting pictures of their immigrant parents also voting for the first time. In the wake of the devastating results, my parents tried to comfort me and my sister, again, under the assumption that a Trump presidency wouldn’t be able to affect us.

What they forget is that xenophobic rhetoric affects us as East Asians too. Just a few months ago, a New York Times journalist was told to “go back to China”. Let’s not forget that before we were blaming Mexicans and Muslims for our country’s shortcomings, we were locking up Japanese people in concentration camps, enacting legislation that prevented Chinese people from immigrating to the United States, and before that even blaming Irish or German immigrants.

I keep thinking about a seemingly harmless encounter from a few years ago, when a classmate was actually surprised that my family would celebrate Thanksgiving, given that we’re Chinese. All this despite my having been born here, growing up here, with my family cherishing this country and being endlessly grateful for the opportunities it provides. At what point will we stop being immigrants and start being “Americans”? Trump’s election just confirms that there is somehow still a difference between the two.

In times of fear, it’s natural to first consider your own safety: you see “it’s us versus them” and “we’re not part of the problem” mentalities. We’ve been trying for so long to protect ourselves, building up this image of the good immigrant, one who doesn’t cause trouble. So we may not be targets now, but there’s nothing preventing us from becoming the objects of blame again.

“First they came for the Socialists, and I did not speak out— Because I was not a Socialist.

Then they came for the Trade Unionists, and I did not speak out—

Because I was not a Trade Unionist.

Then they came for the Jews, and I did not speak out—

Because I was not a Jew.

Then they came for me—and there was no one left to speak for me.”