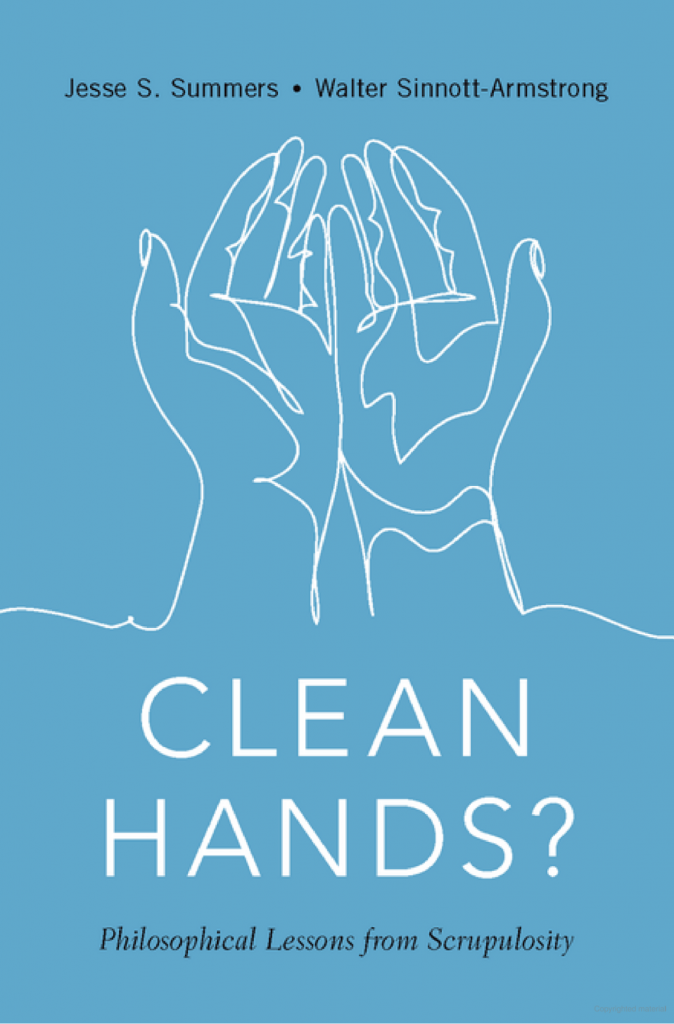 For years, Kenan Senior Fellow Jesse Summers has been researching and writing about a type of OCD known as scrupulosity, which is characterized by irrational moral or religious obsessions and compulsive moral acts. Early conversations between Summers and Kenan Faculty Walter Sinnott-Armstrong around “moral OCD” eventually led the pair to co-author Clean Hands?  Philosophical Lessons from Scrupulosity.  Through close examination and discussion of case studies, Summers and Sinnott-Armstrong illustrate their conclusion that the anxiety that motivates scrupulosity distorts moral judgments and responsibility in predictable ways. What this raises, though, is the question of how pathological moral motivation differs from—and in some cases is similar to—ordinary, even praiseworthy, moral motivation.

As both authors had previously researched addiction, they point out some similarities with scrupulosity/OCD, namely, people choosing to do something they know is irrational despite the negative toll it takes on their lives.  Where they find a difference is the role anxiety plays in scrupulosity and OCD in general. Summers and Sinnott-Armstrong use compulsive hand washing as an example:  A person with hand-washing OCD doesn’t just want her hands to be clean but is anxious that they are not clean and that something bad might happen if they are not. In using the book’s title as a metaphor, the authors introduce the question whether moral OCD can be understood in the same way. As they write:

Throughout Clean Hands?  Summers and Sinnott-Armstrong refine their position around the effects of anxiety on moral motivation. They show that anxiety often leads people to maintain a tight and rigid focus on less important moral issues, ignoring many more important moral issues.  This highlights how subtle and complicated moral motivation is and how we understand it better by drawing on other fields, like psychiatry.  Sinnott-Armstrong adds, “We can learn a lot about the nature and limits of ethics by exploring psychiatric conditions that distort moral judgments. Scrupulosity is a prime example.”

Clean Hands? was written “for psychiatrists who treat patients with scrupulosity, philosophers who study morality, and anyone who has ever wondered about and struggled with the obligations and limits of morality.”  It is available in hardcover on September 26, 2019 from Oxford University Press and can be preordered.

Walter Sinnott-Armstrong is the Chauncey Stillman Professor of Practical Ethics in the Department of Philosophy and the Kenan Institute for Ethics at Duke University with secondary appointments in the Law School, the Psychology and Neuroscience department, and the Duke Institute for Brain Science. He has worked on ethics (theoretical, applied, and empirical), philosophy of law, epistemology, philosophy of religion, and informal logic.