“We need collaborators on the inside and outside, working together to burn down the system!” Professor Ada Gregory’s words from last week really hit me hard.

See, I like to consider myself a “radical” thinker.

Although isn’t the concept of “radicalness” just a way that decision makers keep “inconvenient” problems from being seriously considered? But I digress.

For example, I don’t just want the U.S. to publicly apologize for centuries of mass genocide; I want our government to amend the Constitution so that the U.S. no longer can exercise any power over Native Nations.

I have felt that our government institutions are slow to change, and that’s just a fact we must deal with even if it’s incredibly frustrating. Thus, I have not always been a big fan of playing the political game.

But Professor Gregory’s words made me remember that ineffective government isn’t a given. We can make government work more effectively. If non-institutional and institutional radicals worked together, a lot of positive change could occur.

This idea is kind of like guiding power to its own critique. Non-institutional agents can assist institutional disruptors who work to upend the system internally.

I believe that this encapsulates Rustin’s ideas of coalition building in From Protest to Politics. If we can “broaden the social vision” and build a coalition of institutional and non-institutional agents who pursue different but aligning goals of equity, this will have the greatest chance at achieving change.

But where do I fit in?

As a White-coded, heterosexual male, the system has been built for me to succeed. Charles Mills agrees with this in New Left Project’s Interview and details how patriarchy is an intrinsic aspect of liberalism. For the entire history of United States history, our public policies have been overtly oppressive. Since change has only recently began to occur, we can see these institutional inequities that have persisted for centuries.

So, perhaps I could function best in a system that was designed for me to succeed so I can uproot it form the inside. But that said, I am also Chickasaw and have a hard time compromising over indigenous justice. I have worked within the system before, and institutional compromise has been extremely painful. Therefore, I would like to work outside the system as a radical storyteller, but also collaborate with institutional agents to burn it all down. Further, storytelling is unique in that it can function just as well outside the system as inside the system. 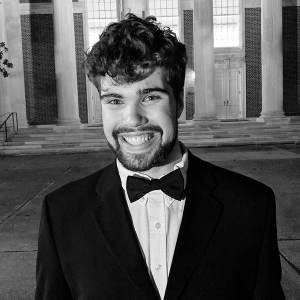 Quinn Smith is a second-year student majoring in public policy from Albuquerque, New Mexico, and is a member of the Chickasaw Nation. Aspiring to create change through storytelling, Quinn grapples with telling hard truths concerning Native American history, existence, and identity. His current project with Duke Gardens will transform the popular attraction into a space that tells indigenous stories. Quinn is a documentarian, filmmaker, writer for The Wellian Magazine, and violinist in the Duke Symphony.

All posts by Quinn Smith