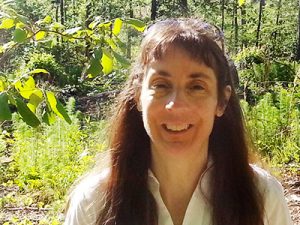 Gretchen Engel is Executive Director at the Center for Death Penalty Litigation, a non-profit law firm that provides direct representation to inmates on North Carolina’s death row, as well as consulting with and training attorneys who practice capital litigation across the state. She also participated as a panelist for the April 20, 2015 Conversation in Human Rights event on human rights and the death penalty. DHRC at KIE Project Director Suzanne Katzenstein conducted this interview electronically.

Suzanne Katzenstein: Where did you grow up, and what were your early years like?

Gretchen Engel: I grew up with my parents mostly in Michigan and Minnesota, where there was little racial diversity, no death penalty, and a lot of snow.

In our home, the surest way to get my parents to say no was to point out, “Everybody else has one.” For them, if everybody was doing it, it was probably a waste of time, and if everybody thought so, it was probably wrong. However, they never said no to book purchases and we always had a dog. But we didn’t get a TV until I was 11, when my great uncle bought us one, at which point we became loyal fans of M*A*S*H. We spent a lot of time outside, and on vacations we drove to places like the Bad Lands and Glacier National Park, where we camped and ate fried spam and roasted marshmallows.

SK: How did you become interested in the death penalty and more specifically death penalty litigation? Did you work on other issues first?

GE: In high school, I joined the Lincoln-Douglas debate team and the topic one year — probably just on the heels of the executions of Gary Gilmore and John Spenkelink — was the death penalty. I started with Albert Camus’ essay “Reflections on the Guillotine” and went on from there.  It seemed obvious that Ramsey Clark, Martin Luther King, Jr., and Bobby Kennedy had the better part of the argument and that the death penalty was wrong.

As a kid I’d read a lot of books about slavery, the Underground Railroad, and the Civil Rights Movement as well as biographies of Frederick Douglas, Harriet Tubman, Rosa Parks, and other amazing African-Americans. The fact that the death penalty was imposed unfairly on the basis of race concerned me a great deal, and I think I got — even at that age — that the death penalty was a way of prettying up lynching.

In law school, I worked at two offices that represented death row prisoners, first in Alabama with Bryan Stevenson, and then in Georgia with Steve Bright and Clive Stafford-Smith. I strongly remember the first time I drove back to Montgomery from meeting a death row client at Holman Prison. The drive is about an hour and a half, and I was nearly hysterical the entire trip up I-65 thinking how unbelievable it was that the state wanted to take the human being I’d just met and put him in an electric chair and kill him.

I went to law school thinking I wanted to work against racism and poverty. The death penalty brings those issues together in an obscenely powerful way.

SK: What does your work entail?

GE: I have the tremendous pleasure of working with incredibly smart, dedicated, and morally courageous people at the Center for Death Penalty Litigation. I also have the good fortune of having great variety in my work. I get to think and write and go all over the state to meet my clients’ family members, jurors, teachers, mental health experts, attorneys, and clergy. Sometimes I get to argue in court and present witnesses.  I talk to my clients at the prison. Now that I’m the executive director, I also do fundraising, write grants, and manage people.

SK: What are the most rewarding and challenging parts of your work?

GE: The best thing is to work with a team of bright and committed people on a case and win.  Whether it’s trying to convince a judge that my client’s sentence is unfair, or that racial bias tainted selection of my client’s jury, or that my client has intellectual disabilities, there is a huge amount of information to organize and present in a persuasive way. I like the challenge of that and the thrill when it all comes together.

It is also extremely meaningful to advocate for people who have been disenfranchised and powerless their entire lives, and to earn their trust.

SK: What advice do you have for students who are interested in pursuing death penalty work?

GE: I trust students know they must be committed to social justice, must work on their writing, analytical, and oral presentation skills, and must volunteer or work at capital defense offices while in school.

What I think is vital for advocates against the death penalty is to learn history, particularly the history of racial oppression in this country.  It has so much to do with how our legal system operates.  Poverty and mental illness are also a big part of the story.  Effective advocates have to understand all of the structures that have an impact on our clients and lead them to the place where they could commit capital murder.

Understanding these things will help to develop empathy, another vital part of this work.  You have to have empathy for all of the people touched by murder: the victims and the people who loved them, the clients and the people who love and failed to love them, the workers in the prison who see the clients every day but can be called on to help poison them to death at two o’clock in the morning, and the jurors who did not ask to be conscripted into the task of deciding whether a fellow human being should live or die.