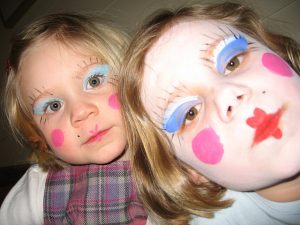 It seems the latest group targeted by cosmetic marketers is… pre-tween girls. Just when you were starting to get used to the idea that such a term as “tween” exists (that would classify girls aged 9 – 12), there is now a new category brand of consumers, individuals who are so young the best label the marketing world could come up with for them was “pre-tween.” This month, Wal-Mart is launching its beauty cosmetics line GeoGirl targeting girls aged six to ten. The line includes blush, eyeshadow, eyeliner, mascara and lip gloss, and, according to Wal-Mart representatives aims to teach young girls how to maintain beauty care in an environmentally responsible way.

Don’t make me laugh. It is rather absurd to suggest that the best way to teach children environmentally conscientious behavior is to buy them a particular line of cosmetics (“No need to recycle, honey, your eyeshadow is all-natural!”). One wonders if it is actually significantly “green” enough to even be discussing as a legitimate benefit to our environment. Wearing this make-up will prove you care about the environment? Talk about greenwashing. One of the major selling points for GeoGirl is its environmentally safe nature; yet to argue that GeoGirl is worth anyone’s while because it somehow instills a “green attitude” among its users is about as effective as arguing that guns would be a better idea in schools if they were biodegradable. Right.

GeoGirl certainly is a bold move towards socializing girls to base their self-worth in their appearance even earlier than they already experience; but are we really surprised? Girls today are perpetually bombarded with manipulative, negative messages from the media, their peers, and even their parents. It is more than a little nauseating that pre-pubescent girls are now considered a consumer group for cosmetics and not just, say, Johnson & Johnson baby wipes, but you can’t fairly blame Wal-Mart for causing the problem; perpetuating it, yes, but marketing is usually about cashing-in on consumer interest that already exists. Hate the game, not the player.

Wal-Mart’s launching of GeoGirl points to a larger issue in American society: paradoxically, even as we strive towards equality between men and women in schools and in the workplace, women are subjected to intense social pressure to focus most of their time and energy on their appearance. A cosmetics line geared towards eight year-olds, though in itself concerning, is part of a wider picture in which girls are encouraged to be pretty before they are encouraged to be smart or creative or happy. In many cases girls sacrifice their happiness or creativity or intelligence by spending so much time in front of the mirror. The truth is that a cosmetics line like GeoGirl is merely a symptom of the American perception of what it means to be a woman. More important than placing blame on Wal-Mart is addressing the societal forces that engender consumer interests that made it possible for GeoGirl to launch in the first place.