Ethics of Now Series Kicks off with Tommy Orange 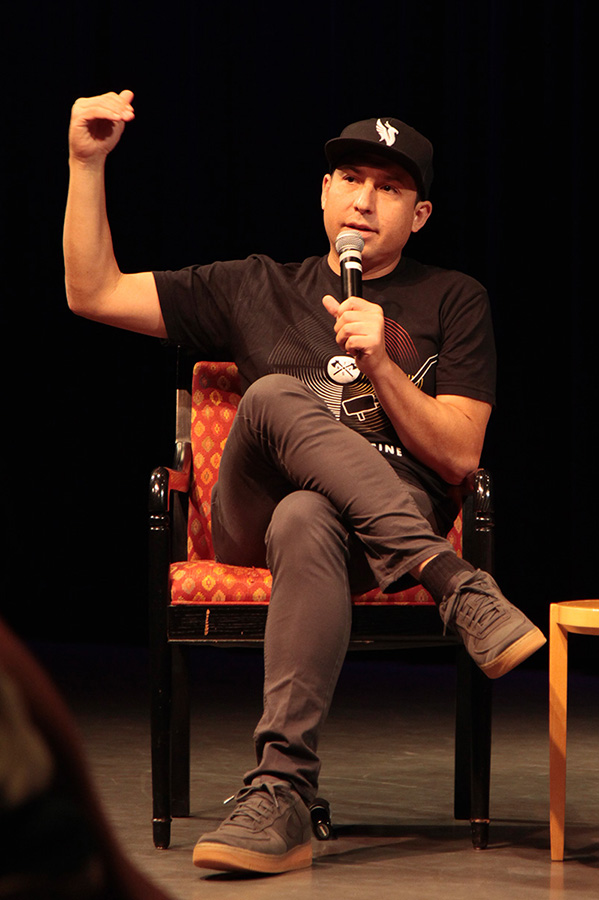 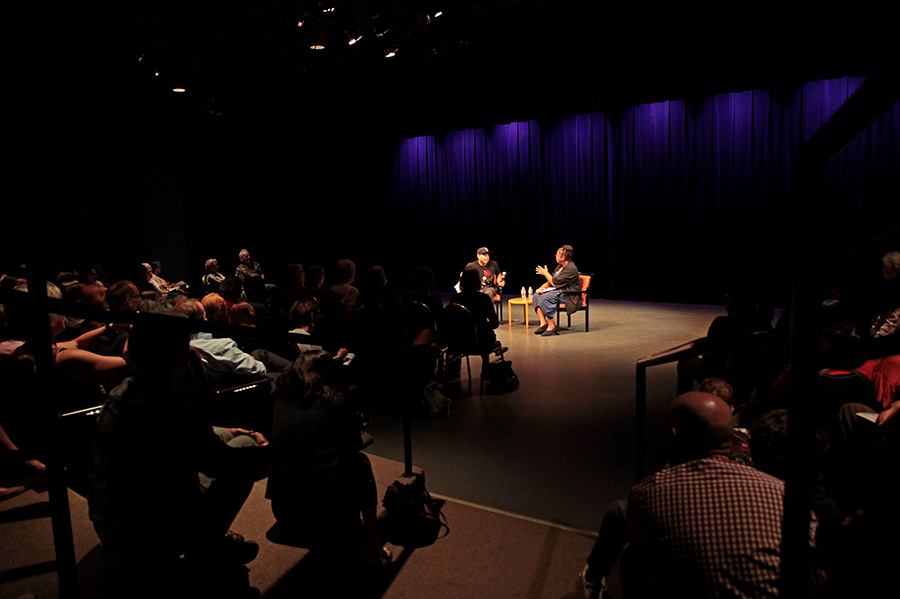 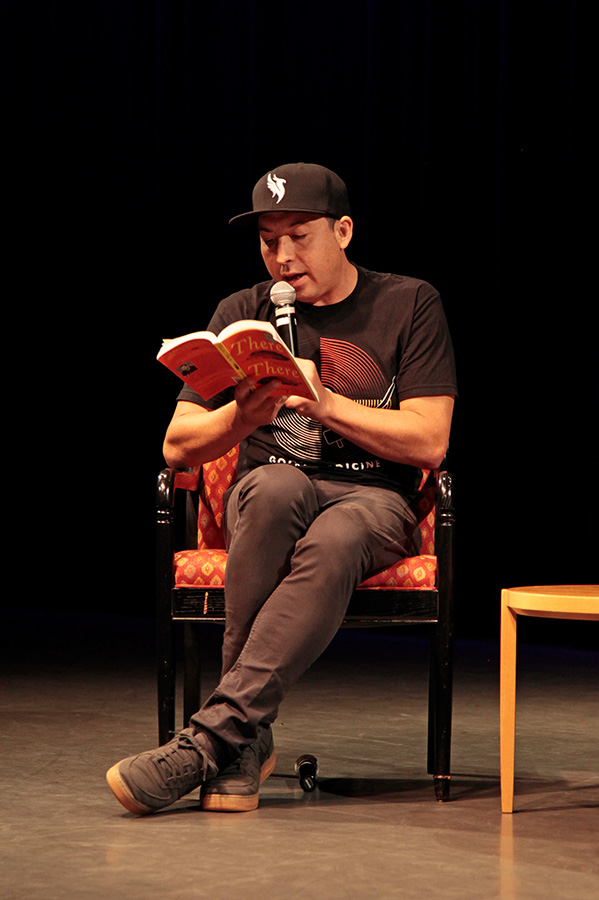 This second year of  the Ethics of Now Series is off to a momentous start with NY Times best-selling author Tommy Orange leading the charge.  Entering a record-capacity Durham Arts Council theatre to roaring applause, Orange and discussant Adriane Lentz-Smith were eagerly welcomed into this gathering of the greater Durham community. Kenan Director Suzanne Shanahan introduced the Series, describing the Ethics of Now as an opportunity to “bring together authors, activists, and academics to have a chat with Adriane about issues and concerns that both Durham residents and Duke folks have.”

Duke historian and Kenan Senior Fellow Adriane Lentz-Smith introduced Orange as a Graduate of the MFA Program at the Institute of American Indian Arts, a member of the Cheyenne and Arapaho Tribes of Oklahoma, and born and raised in Oakland, CA.  “His book There There was on pretty much every best book list from the New York Times to Entertainment Weekly, finalist for the Pulitzer Prize,  and even Obama’s summer reading list.”   Lentz-Smith began the evening with a land acknowledgement statement as well as an explanation as to its importance, which Orange touted as the best he had ever heard. Lentz-Smith explained: “One of the reasons people do land acknowledgement statements is to remind us that our stories are not the first stories to unfold in the space that we occupy and to think about the ways we walk amongst not just the memories of people, but also acknowledging the people our government worked to displace.  In doing so we bring a sense of seeing, saying, knowing and reckoning, which are themes we will be discussing more tonight.”

Lentz-Smith and Orange continued in conversation for the next hour around themes in and beyond There There.  Orange beautifully characterized growing up in Oakland as the son of a white mother and Cheyenne father as he shared influential experiences from his youth.  Committed to a more genuine narrative of American history, Orange turned to writing as a means to illustrate the untold stories of Native people in modern and urban environments.   When talking about discovering the power of the novel, Orange said: “I write because I truly believe in the impact of what art can do in lives and to help a very troubled world.”  The evening’s discussion concluded with Lentz-Smith inviting Orange to read a passage from his novel before opening the floor for an abundance of audience questions and comments. 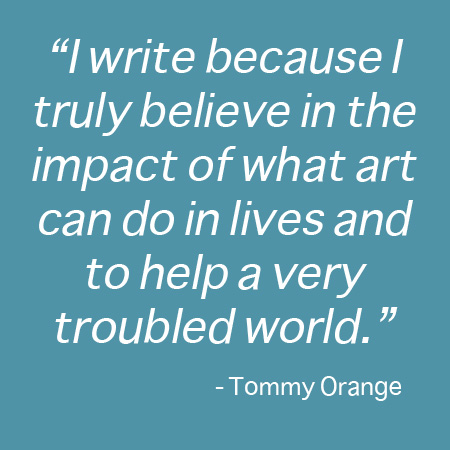 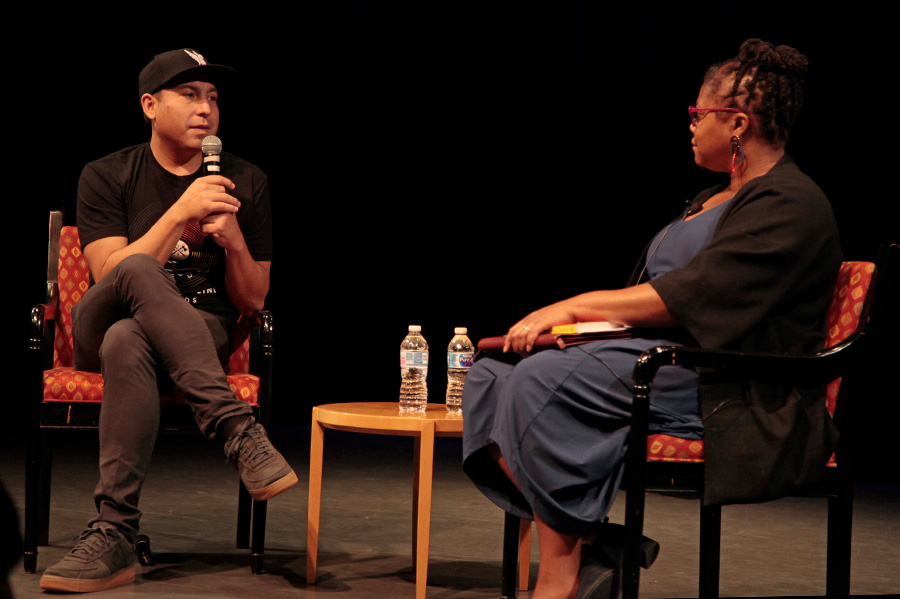 To read Tommy Orange is to contend with histories that, as he puts it, “run counter to the way the American narrative has been told.” In There, There he opts for brutal honesty over comforting fictions and empathy over complacency.  In so doing, he offers Native Americans and all Americans a means of healing the wounds of the past and present.

The Ethics of Now continues on October 18th with the Women’s Prize for Fiction recipient and NY Times best-selling author of An American Mariage Tayari Jones.  Read more about the entire 2019-2020 series here.