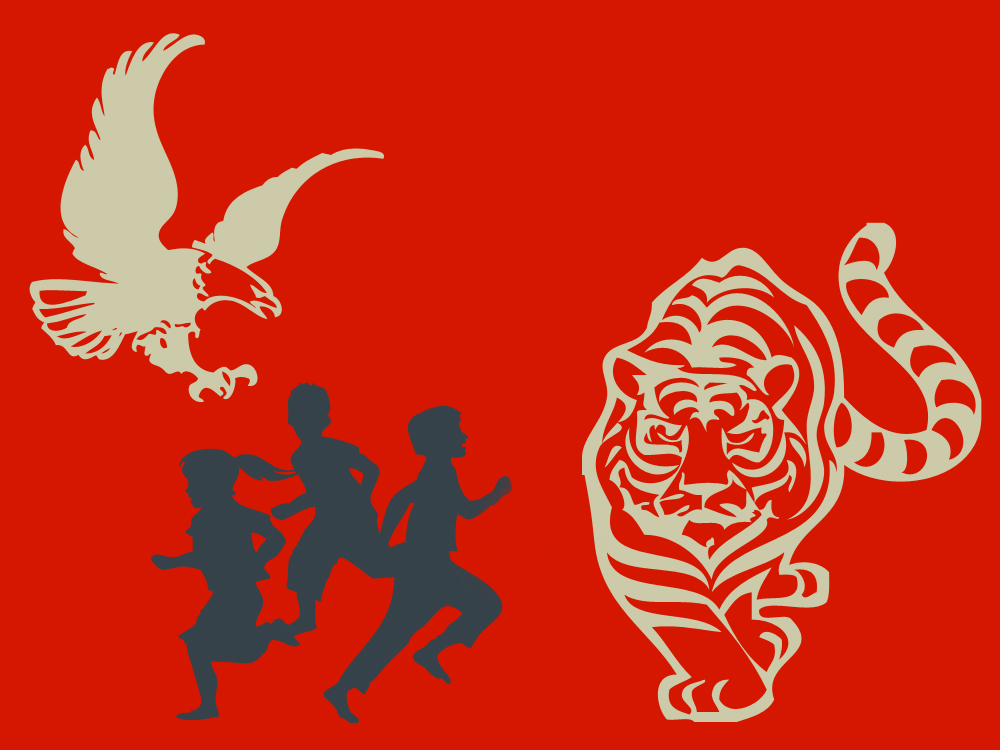 A video showing a Chinese dad forcing his son to run essentially naked in the snow has gone viral recently. The boy cried for his dad to hug him and instead his father told him to do pushups in the snow. It is a “training regimen,” the self-proclaimed “Eagle Dad” told the media, for his pre-maturely born son and that he has cleared this Navy SEAL-like routine with the doctors beforehand.

Quite a regimen for a crying four-year-old.

I’m sure this immediately reminded many of the Tiger Mom, the Yale professor who published a memoir of her controversial Chinese parenting style,* she used to teach at Duke, too. I would be terrified to have her as a professor. In fact, though it is a small sample size and certainly biased (remember, only angry people go online and post), here is her rateyourprofessor profile, with a five being the highest score.

It seems clear that both the Eagle Dad and Tiger Mom want the best for their kids and are implementing measures they consider most effective. It’s just that their measures are…extreme (Chua admitted that she has called her daughters garbage at times).

This certainly draws parallels with the “Botox mom” I wrote about last year, though the botox mom turned out to be a liar and just wanted attention and money, a similar question persists: what do we do in these kinds of situations? What makes Tiger Mom’s and Eagle Dad’s cases different, however, is that the children demonstrated clear forms of resistance.

So how do we determine the “mother-knows-best child abuse?” (Tangled, anyone?)

The Eagle Dad was not teaching his son how to make snow angels, but he has cleared it with the doctors beforehand to make sure his son’s health will be okay. So how do we say “that is bad” and at the same time saying that forcing our kids to take bitter medicine when they are sick is “good?” Or when we force young children to go through the difficult gymnastics training knowing that it is better for them in the long run?

I am certain that the value judgments on these parenting styles differ in cultures as well. Though Eagle Dad has created an uproar in both China and the U.S., Tiger Mom’s book has created varying opinions in the two different countries.

Perhaps the hardest thing to swallow is the fact that these harsh parenting techniques may be working. The Eagle Boy is, as far as we know, currently physically healthy despite pre-mature birth, and the Tiger Girls turned out to be phenomenal according to multiple sources. When I really think about it, it is really hard for me to rationally tell the dad that he is wrong when every part of me wants to put him in jail.

P.S. Some other things to think about: Asians and Asian American students have incredibly high cheating and suicide rates.

*Here’s an excerpt from an essay Chua wrote:

“Get back to the piano now,” I ordered.

Back at the piano, Lulu made me pay. She punched, thrashed and kicked. She grabbed the music score and tore it to shreds. I taped the score back together and encased it in a plastic shield so that it could never be destroyed again. Then I hauled Lulu’s dollhouse to the car and told her I’d donate it to the Salvation Army piece by piece if she didn’t have “The Little White Donkey” perfect by the next day. When Lulu said, “I thought you were going to the Salvation Army, why are you still here?” I threatened her with no lunch, no dinner, no Christmas or Hanukkah presents, no birthday parties for two, three, four years. When she still kept playing it wrong, I told her she was purposely working herself into a frenzy because she was secretly afraid she couldn’t do it. I told her to stop being lazy, cowardly, self-indulgent and pathetic.