I’ve been struck recently by the realization that Kenan has organically integrated more and more of the arts into its programming, which has had me thinking more deeply about the windows that can be opened through creative representation.  I’m reminded in a particularly vivid way each day as I walk down the halls of West Duke.  It has become a standard practice to display artwork along our hallway that relates to one of our programs.  Poignant thoughts hit me on my way to my office, and different images strike me in different ways with each trip down the hall.  When I see others stop, on the way to class or a meeting, I have this great sense of fulfillment that the walls are actually speaking to the issues we are exploring.

Exploration in the arts has been particularly useful for our focus on global citizenship.  A collection of photographs entitled One Summer in Damak, from a joint undergraduate and graduate research trip to refugee camps in Nepal, was a huge success last year.  Many people in the Duke community learned about the refugee experience through this photo essay, and local resettled refugees were able to gather and talk about their past lives through a reception held for the exhibit opening.  Most recently, the Duke Human Rights Center at KIE has sponsored a photography exhibit called Nowhere People, which documents stateless populations around the world.  It opened last week with a panel discussion about the ethics of photography for social change, which included the Nowhere People photographer Greg Constantine, UNHCR Communications Officer Charity Tooze, Duke Pediatrician John Moses, and Center for Documentary Studies Director Tom Rankin.

One of Constantine’s descriptions of his work, which is very much tied to the medium by which he works, is that he is providing visual evidence, he is making an invisible condition visible.  Throughout the evening, he was not simply talking about photography; explanations about the causes and condition of statelessness continually arose.  His body of work is clearly meant to be an educational tool.  Of course, how best to use such a powerful tool is critical.  He went on to say that roughly 25% of his time is spent taking the photographs, and the other 75% is spent strategically controlling how they are used.  Many ethical issues were raised.  Is it appropriate to use an individual’s story or image to take a stance on a broader issue?  What counts as full disclosure of how the work will be used?  How do you reconcile not being able to do something, in a concrete sense, for the people right in front of you who you are representing?  How can you best control the democratization of your work once it enters the public sphere?

These are tough questions for documentary photography and film, photojournalism, and other forms of creative expression.  They are also things we are thinking hard about, since by displaying and sharing creative work we are a part of that process of representation, both its value and its risk.  Students in our Ethics Certificate Program discussion section have heard from playwright Mike Wiley and Documentarian John Biewen about how they address ethical issues in their work, and have grappled with their strategies as well as what they heard from the Nowhere People panel.  If I were to summarize two key themes that have emerged, I would say they are: the importance of research, and the importance of framing.  The more research you do, the more confident you can be that you are giving an appropriate representation.  And by being thoughtful and deliberate with the way you frame a story—hopefully with the input of those whom you are documenting—you show it greater respect. 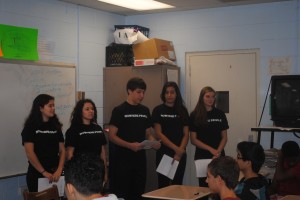 Some other Kenan students have been deeply involved in this process of research and framing in order to illuminate an issue creatively and educationally.  Through our DukeImmerse program last spring, 12 students collected the stories of Bhutanese refugees in Nepal and Iraqi refugees in Cairo through life story interviews, while also intensively studying refugee issues through a semester’s course load.  They were then equipped to create a magazine, as well as a set of monologues to be performed dramatically. In the latest extension of this project, our Ethics, Leadership, and Global Citizenship FOCUS students are currently performing the monologues at Durham high schools.  After a strenuous process of research and crafting, we are now confident in using them as an educational tool.

Artistic representation must be undertaken carefully, but it can be such a powerful conduit into an issue.  Art, film, drama, music… these things strike emotional chords in us that are invigorating.  If we use these mediums to make certain conditions visible, the table is then open for deeper discussion and learning.

We will be using a different form of art as part of a symposium on rights and resources in Madagascar on December 3—look out for a concert at Duke Coffeehouse by Malagasy musician and activist Razia Said.  It should be a fun night of creative representation!