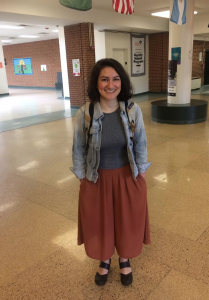 What would you do if you had $75 left in your bank account? For Areli Barrera de Grodski, the answer was to start a business – Cocoa Cinnamon.  In just a few years, together with her husband Leon Grodski de Barrera, Barrera de Grodski managed to expand Cocoa Cinnamon/Cacao Canela from a coffee-bike to a “three-location (semi-bilingual) coffee shop business.”  This week, while interviewing Barrera de Grodski, I particularly noticed how factors other than profit, such as her desire to create an authentic, inclusive, gathering space, to promote the work of local artists, and to share her passion for coffee with the Durham community, fueled Barrera de Grodski’s hard work.  Explaining that while Cocoa Cinnamon is a business, she and her husband ascribe to practices, such as paying their employees a living wage, and donating a portion of their profits to local organizations, that seemingly contradict the profit motive.  When Barrera de Grodski claimed that Cocoa Cinnamon endeavors to be a “business with a conscious”, I was reminded of insights into our work ethic shared by behavioral economist Dan Ariely in a TED RadioHour podcast, “What Pushes Us To Work Hard – Even When We Don’t Have To.”

Ariely ultimately concludes that in today’s post-industrial economy, “money is just one of the [many factors that motivate us to work] and maybe not even the most important one.”  During the podcast, Ariely recounts his findings of a social experiment in which a group of people were given instructions regarding how to produce a piece of origami.  Although the resulting origami were “ugly”, the origami makers believed them to be worth much more money than did a group of external evaluators.  Next, the same group of origami makers were asked to craft again, but this time without the instructions.  The origami turned out to be even “uglier” than the first creations and received an even lower appraisal from the external evaluators; however, the origami makers believed them to be more valuable than their first ones.  Calling this phenomenon the “IKEA effect”, Ariely deduced that similar to his greater affinity for self-assembled furniture purchased from IKEA, the origami makers derived a greater value for their own creations due to the care and effort of their labor.  Indeed, Ariely claims that if we value all of the things that go into work, such as “meaning, creation, identity, pride…we may also be happier as a result.” Here, I thought about what factors may have motivated all of the wonderful guest speakers to graciously take the time to become mentors for the girls at Brogden.

Even though her weekly grind (no pun intended) typically exceeds 60 hours, Barrera de Grodski explained that “getting rich” is not her intention.  Although she has received offers to franchise Cocoa Cinnamon, she is worried that the mission behind her business will deteriorate without her care and supervision.  I am looking forward to our group field trip on Cinco de Mayo to the Lakewood location of Cocoa Cinnamon not only to see the fruit of Barrera de Grodski’s labor, but also to eat some delicious churros!