Bridging the Gap: A new partnership with historical ties

“Of all the forms of inequity, injustice in health is the most shocking and inhumane” – Martin Luther King Jr.

I reflect on this quote often. It fuels my passion as a Black healthcare provider to treat and heal all individuals, but especially those whose unmodifiable circumstances yield a lower quality of life. It drives my motives to do meaningful work that will make a difference. Heart disease has consistently remained the leading cause of death in the United States. Center for Disease Control (CDC) research shows that African Americans are 20% more likely than their non-Black counterparts to account for these deaths. Social determinants of health serve as well-known culprits of this disparity. My current research and quality improvement measures, in partnership with the Lincoln Community Health Center (LCHC) and American Heart Association (AHA) focus on addressing and eliminating this disparity. Before providing further details of my work, I’d like to more descriptively introduce my Durham community partner.

The original Lincoln Hospital located in Durham, North Carolina, was established in 1901 as the first non-religion affiliated hospital for Blacks in North Carolina. Lincoln served as one of the only options in the area where Black patients could be treated, Black physicians could practice and receive training, and Black women could attend nursing school. Lincoln Hospital has since undergone several modifications but continues its legacy as Lincoln Community Health Center, which was officially founded in September of 1971. LCHC proudly stands as a center for preventive and primary healthcare for all members of the Durham community regardless of race, religion, or socioeconomic status. However, in an effort to provide a more specific and accurate illustration of the average individual to receive care at Lincoln, I’d like to highlight the following statistics from a 2019 North Carolina Primary Care Conference: 71% of patients at LCHC are at or below 100% poverty level, 89% of patients are of racial or ethnic minorities, 55% of adult patients are uninsured, and 49% of patients report they are best served in a language other than English. You should be under the impression that LCHC is exceedingly vital to a particularly vulnerable community.

My first encounter with LCHC was during the summer of 2019, just a few months before I would relocate from my hometown in Southern California to attend Duke University School of Nursing (DUSON). As a Health Equity Academy II Scholar, I was presented with the opportunity to participate in a pre-immersion nursing (PIN) program during which I was exposed to the Durham community and other aspects of what my future life as a DUSON student would resemble. During the PIN program, I was escorted on a tour of the LCHC facility where I initially became educated on its rich history. It was during this unique experience that I became aware of four things: 1) life experiences for all people, especially minorities, were drastically different here than in my west coast city 2) social determinants of health contribute significantly to health disparities 3) equal is not synonymous with equitable 4) I wanted to be involved with LCHC and make a positive impact on the community that it served. A few months later, I was offered the position as a Graduate Student Leader on the Bass Connections’ “Closing the Gap on Health Disparities and Treatment Outcomes in Hypertension” project team, which launched my collaborative partnership with LCHC and the AHA.

Our work began with the knowledge base that only 48% of individuals with hypertension were able to effectively control their disease. Additionally, 42% of Durham County residents suffer from hypertension, with an exacerbation of this burden being prevalent among minorities. In the past few months, our team has concentrated on developing a sustainable plan involving the incorporation of evidence-based guidelines, comprehensive blood pressure monitoring and data collection, and patient contribution. Our primary intervention involved distribution of home blood pressure monitoring systems, consistent virtual patient follow-up, and healthcare education. Thus far, our efforts have allowed us to extend healthcare access to at least 71 African American men in the Durham community and encourage consistent and effective management of their hypertension. Why is this significant? Hypertension is the most substantial risk factor for stroke, a condition responsible for more than 140,000 yearly deaths with the majority of those deaths being African American men. 120 mmHg systolic over 80 mmHg diastolic is the identified ideal blood pressure range. Increases in these numbers are directly proportional to heightened stroke risk. Among the men that received our intervention, about 41 were recognized as high risk with systolic measurements titrating up to 218 mmHg. Get the picture? As my team and I continue our program, it is our intention to build on our previous efforts while also implementing newly developed interventions. In order to incite an upsurge in community participation our first additional intervention will consist of organizing virtual hypertension related education classes. As I venture through this ongoing experience, I hope to deepen the impact that I have on this population. My goal is to continue to identify and mitigate social determinants of health, improve health literacy and ultimately promote optimal health for these burdened individuals. Simply put, the combat for equity continues on. 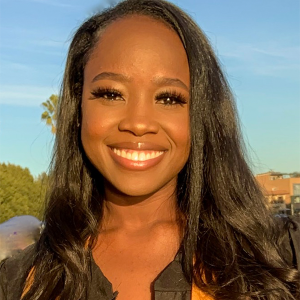 Unique Whitehurst is from Long Beach, CA. She is a member of the Duke University School of Nursing’s MSN-NP class of 2023 specializing in psychiatry and mental health. Unique is a recent December 2020 graduate of Duke’s ABSN program where she was recognized as an executive board member for DUSON’s Active Minds organization, an inductee of Sigma Theta Tau International Honor Society, and the selected student speaker and exemplar of excellence at the annual Commitment to Excellence Ceremony. Unique is a current member of the American Psychiatric Nurses Association and serves as a graduate student research leader at Duke. Her research interests center around improving health outcomes for minority populations. Her current research efforts involve collaborating with community partners to decrease the burden of hypertension in African American males here in the Durham County area.

All posts by Unique Whitehurst