The above list might represent the top 5 stereotypes conservatives and liberals think the other side holds about them.  This self-identifying Stereotypes Exercise is just one tool used by Better Angels in their Red/Blue Workshops to initiate discussion among a politically-opposed group.  Once each faction has come up with their list of perceived stereotypes, the groups talk about the pain and frustration around them, discuss how they might be unfair, misleading or exaggerated; but also, if they might just hold a kernel of truth.

Tuesday evening, a standing-room-only crowd filled the Holsti-Anderson Family Assembly Room for Kenan’s Arete Initiative talk on “Love Your Enemies?  Depolarization in the Age of Donald Trump”  with Better Angels leaders Ciaran O’Connor and John Wood, Jr.. According to the pair, many people today believe that their political adversaries are not simply misguided, but that they are also bad people whose ways of thinking are both dangerous and incomprehensible.  O’Connor and Wood described political polarization in the US not as a new problem since the 2016 election, but one that has been steadily gaining momentum over the last 20 years.  The Pew Research Center, which has been measuring political polarization in the United States since 1994, recently found that the average partisan gap has increased from 15 percentage points to 36 points.  O’Connor, a former staffer for the Clinton and Obama political campaigns, cited that up from 5% in 1960, today over 50% of respondents would be displeased if their child married someone of the opposing political party.  He also identified an alarming acceptance of threats, violence, and even death as a means to handle political disputes.  Wood, who ran for Congress in 2014 as a Republican against Rep. Maxine Waters in Los Angeles, pointed to data showing on average, Thanksgiving dinners are being cut short by at least 30 minutes because of political conflict; meanwhile, our current Congress has been the least productive of all time. 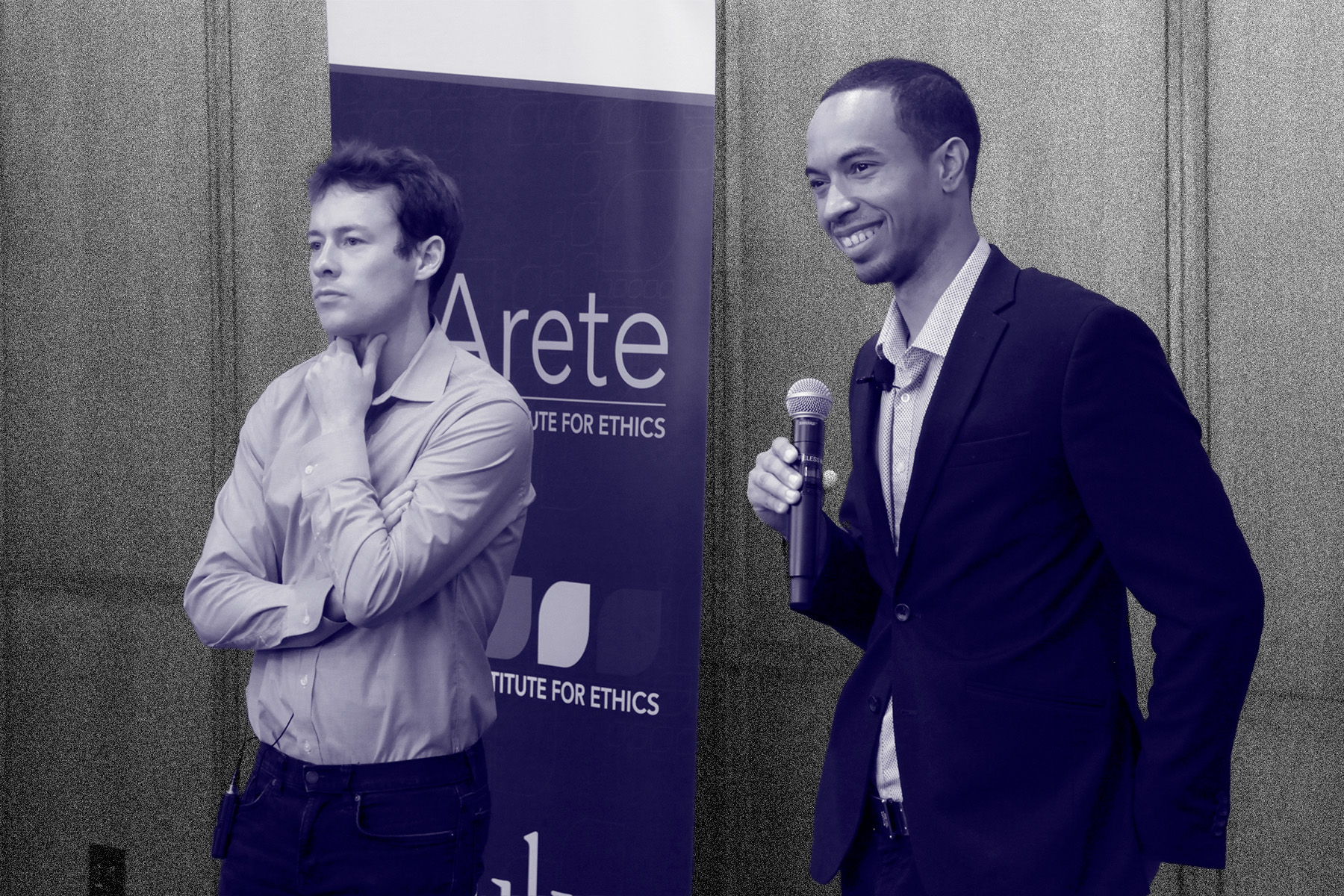 In order to combat such a degree of polarization that breeds anger, distrust in others’ good intentions, and threatens our democracy, this talk sought to identify: How can we learn how to talk to one another and find common humanity across partisan divides? How should we engage with “the other side” without compromising our values? Is “Love Your Enemies” a worthwhile philosophy in today’s day and age, or is it naive and counterproductive?  Launched in 2016 and now over 8000 members strong, Better Angels is a national citizens’ movement to bring liberals and conservatives together at the grassroots level — not to find centrist compromise, but to encounter one another as citizens. Through workshops, debates, and campus engagement, Better Angels helps Americans understand each other beyond stereotypes, form community alliances, and reduce the vitriol that poisons our civic culture.

Wood talked about his motivation and commitment to this cause despite all the grim statistics which have lead to our current moral challenges, saying, “The United States of America is defined by its ability to foster powerful relationships across differences.”  At the core of this resolve he likens his experience of growing up in a biracial and bipartisan family:

Wood further explains: “The differences that persist between us are real, and it is important to understand the origins of what divides us, but the opportunity that affords us is one in which we can discover those values that are more deeply rooted – that make us a community and made us a community in the first place.  The heart of Better Angels’ work is providing the context for that discovery and rediscovery to take place.  For O’Connor and Wood, establishing a new set of norms in this country in terms of how it is we look at and communicate with each other and how we organize, can set an example for politicians running for office, activists pursuing causes of social justice or liberty, students, and elected officials statewide and nationally  Then, we can begin to stimulate a change in political culture from the demand level up – from the grassroots filtering up to the highest level of our society.

Regardless of what happens in Washington, there can be a sea change in how the American people choose to treat each other that can set the stage for a more responsible and heartfelt brand of politics and social engagement — because the alternative to that is that we can continue in a race to the bottom where victory is going to be defined by our ability to destroy the other side, regardless of whether or not that winds up destroying the country along with it.” – John Wood, Jr. 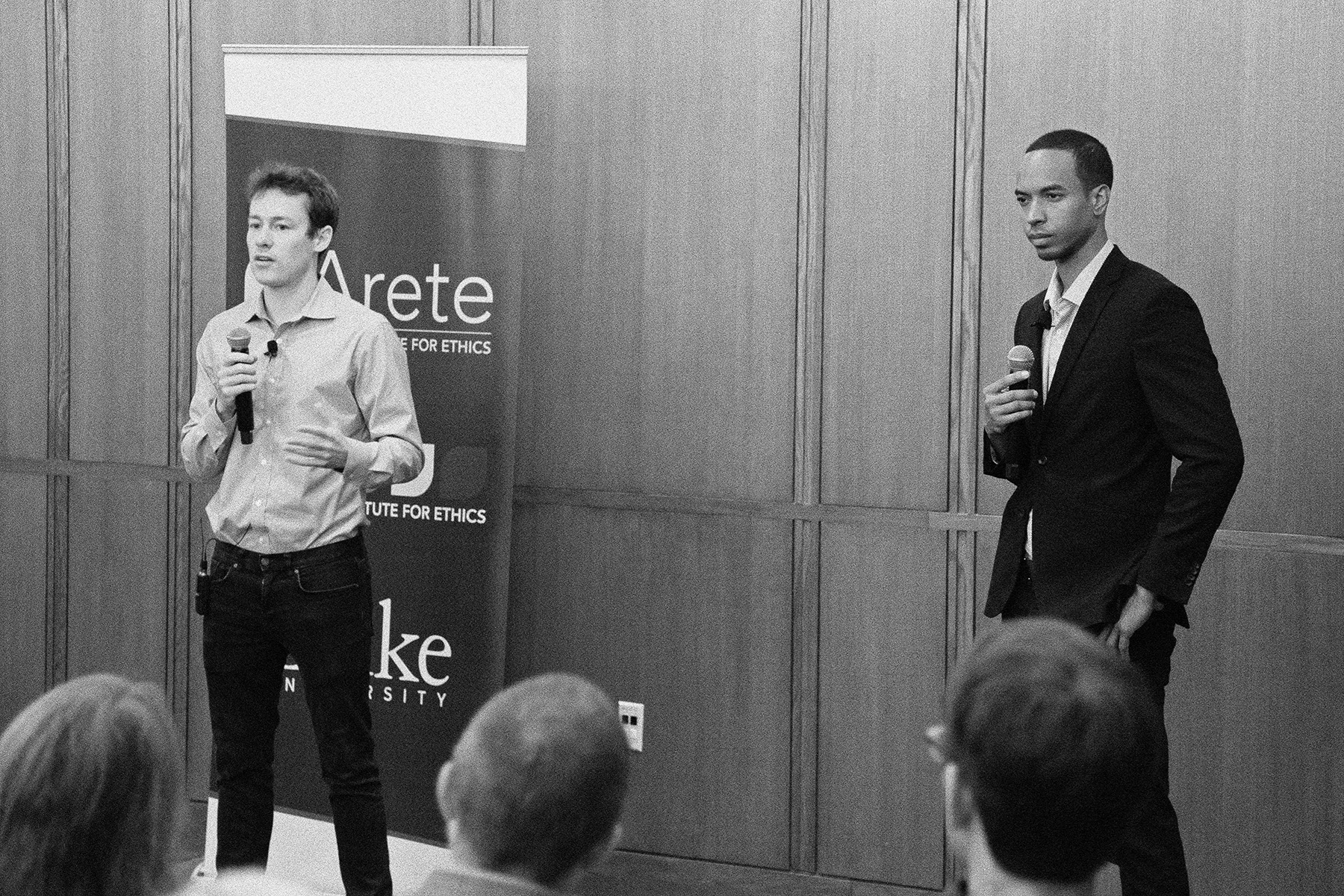 For O’Connor, polarization can best be described as geographic.

“If you live in an area that is liberal, you could go six months without ever talking to a Trump supporter. You can surround yourself with like-minded people, you follow people who confirm your biases on social media, you watch MSNBC, you are feeding your image of what someone on the other side looks like without every exposing yourself to them.”

The question then O’Connor raises is how to bring people together in a way that is constructive?  “People have been conditioned to see cross-partisan engagement as a battle to be won.”  To this end, O’Connor laid out the simple structure used in Better Angels workshops:  “You are not here to change anyone’s mind.  You are not here to persuade or to convince, but to listen and be heard.”

Both O’Connor and Wood agree that while a grassroots movement bringing people together and building relationships across ideological differences is the ultimate goal of being able to work together, there is much more work to be done on social media platforms, high profile media pieces, and podcasts that seek to influence norms in a positive way and closely mimic  the face to face interactions of their workshops.

Learn more about the work of Better Angels from their website: better-angels.org