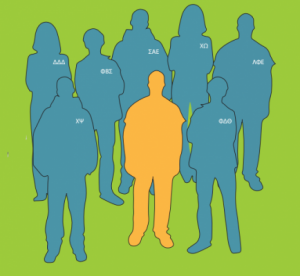 I’m an independent and it’s bittersweet.

Like many of my friends, I rushed freshman year but did not get accepted into my preferred SLG. I mourned for about a day but then realized I was much happier on my own than to be forced into a community of specifically “chosen.” But many of my close friends freshman year were accepted into an SLG or a greek organization. Those who resisted the system altogether oftentimes already had a close knit group of friends that ended up blocking together after Freshman year.

And every year, this seems to be the trend. Those who aren’t accepted into a living group or simply don’t want to assimilate into this campus culture, are left behind. About 34% of Duke students are affiliated with one of the 41 fraternities or sororities on campus and only about 40% of students have no affiliation to a greek organization or SLG. At Duke, unaffiliated students are in the minority.

On the one hand, I am free of social obligations and don’t have to adhere to the rules and culture of many student living groups on campus. On the other hand, many of my friends are, which creates a barrier between me and them. It is no longer so easy to watch a movie with a friend on a Friday night because of their obligations to a semi-formal with their sorority, a mixer with their fraternity, or an exclusive SLG party.

There has been a lot of talk over whether or not institutions should abolish their affiliations with Greek organizations. For a school like Duke, this is unlikely and unfeasible at least for now. This has already been done in many higher institutions, and several Ivy League institutions (including Harvard) now refuse to recognize such organizations on campus. However, this does not fully address the problem the exclusionary principles that pervades our schools and our society.

Duke strives to be create an “inclusive and diverse” campus community with a focus on developing well rounded and thoughtful students. The current culture on campus does not permit this. After Freshman year, over 60% of the student population is siloed into SLGs and Greek organizations that oftentimes (but not always) consist of people who look like them or share academic interests.

While selective living groups and greek life are perhaps the largest foundations of community on campus, there are others. These organizations are responsible for setting the social scene on campus because they oftentimes determine where you live, what parties you are invited to, and what friendships you form.  These organizations shadow others like club sports, music and arts clubs, research teams, religious life groups, and other student-run organizations are also havens of community and provide spaces for deeper interaction and connection.

With rush season just around the corner, many Freshman will see their friends siloed into these living groups and many students will be dealing with the excitement of receiving a bid or the pain and uncertainty of rejection. Instead of becoming discouraged and feeling unwelcome, it is important to focus on developing your passions. Furthermore, if you are make it into your chosen SLG, fraternity, or sorority, don’t feel pressured to find community within those groups or remain in them for 3 years. Now more than ever, this campus needs a reminder that there is no shame in making one friend at a time and developing relationships at your own pace–not a pace dictated by peer pressure.