After Class on a Wednesday 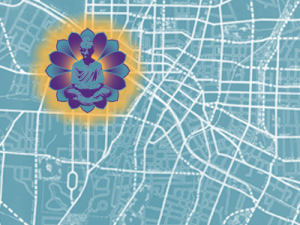 I met Buddha after class on a Wednesday.

As it turns out, he hangs out in an art gallery above Loaf Bakery downtown, and he dresses in brown corduroys. He’s partial to a Finnish heavy-metal band. He doesn’t like to wear shoes. He’s from the Czech Republic.

Okay, back up. On Monday night, my friend Priya asked me to check out a session on Buddhism and Buddhist meditation with her. Minutes earlier, I had been complaining that my life was nothing but school and internships, so even though I actively shy away from anything religious, I felt obligated to take on this adventure.

Wednesday rolled around, and I was still devoid of excuses, so I climbed into Priya’s Jeep that afternoon. Seven minutes late for the original start time, we wandered up the wooden stairs into a gallery, hoping to slip into the back of the class unnoticed.

No such luck: except for a corduroy-wearing, sandy-haired twenty-something sitting in the corner, we were the only people there.

He welcomed us, and pulled up a couple of wooden chairs, and recited the story of Buddha. And I’ll be honest: his accent was so thick, and the air was so warm, and it was so nap time that I could barely pay attention to what he was saying (I guess this isn’t a story of religious revelation).

He guided us through the 16th karmapa, a meditation meant to guide Priya and I to enlightenment: we were to envision colors and figures, and to be conscious of the space.

I can’t say that I left that art gallery any more spiritually enlightened than I entered it, but I did learn something new and intriguing about the city that’s been my home for the last 3 years.

And here’s the thing—I would have never been to this space if not for Priya’s determination to explore every corner of this city that we’re in while we’re in it.

I came away from my meditation experience with a challenge, one that I encourage fellow Duke students to think about as we go our separate ways for the summer and for life: this summer, don’t stop exploring where you are, no matter where that is.  Go out of your way to find different dimensions of that space. Get to know it, and you’ll get to know yourself.

Have a great summer, Duke.