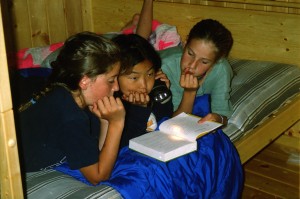 As a child growing up, I was curled up with a book constantly. I read voraciously. My favorite genre was historical novels. Authors were able to capture my attention with the personal narratives of seamstresses, knights, farmworkers, tailors, chefs, underage brides, and handmaids. Their stories kept me engaged and taught me about medieval wars, the 1930s Depression in the Southwest, colonial India, the perseverance of migrant farmworkers in 1950 California, and the stigma individuals diagnosed with AIDS faced during the 80s.

This past week, I attended a show put on by The Monti and monologues given by the Kenan DukeImmerse students. These two unrelated events used storytelling to immerse the audience in a perspective different than their own. Similar to the novels I read as a child, I was drawn to the personal narratives shared.

The Monti is an organization unique to Durham. The group tackles challenging issues for society at the moment: for example, race, religion, and betrayal. Instead of presenting the one correct way to interpret an issue, The Monti presents multiple viewpoints on the topic. Members of the community present their personal stories on the matter allowing the audience to form their own opinions. While each story is told from the performer’s point of view, they all bring other voices to the table.

“Stories about Race” was told by five storytellers of different races, ages, and sexes. They shared personal challenges they faced in the community and within their families. Two of the stories were about being “brown” in America post-9/11. Torang, an immigrant from Iran, shared about growing up in in the Middle East and seeing the burning of American flags which she suggested could be seen as a racist gesture against Americans. But racism against her culture was more personally felt when she moved to California. There her high school math teacher continually told her not to sit by the radiator because he did not want her to blow up the school. Abhi, an Indian, discussed how his family’s house was toilet papered shortly after September 2011. Other presenters talked about microaggressions, depression, racist family members, and their attempts to change behavior to “fit in.” The personal nature of these shared stories permitted listeners to glimpse life as another and reflect on their own experiences.

The DukeImmerse Monologues differ from the Monti presentations in that the students do not share their own experiences, but they relate the stories of refugees they have interviewed. During March 2016, six Duke students traveled to Jordan where they did ethnographic research with refugees from Syria and Iraq. Each student shared two life-story interviews during the hour long performance titled, “Deconstructing/Reconstructing: The Refugee Experience.” 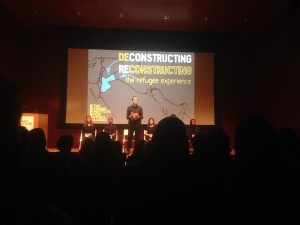 The introductory remarks informed the audience of the current global refugee situation: 52 million people are displaced globally, yet only 15 million of that number are registered as refugees with the UNHCR and thus have “official” status as having well-founded fear of persecution based on: 1) race, 2) religion, 3) nationality, 4) membership in a particular social group, or 5) political opinion. The facts and figures help us see the enormity of the crisis, but they do not drive home what it means to be displaced, and to lead a life of suffering. The life stories do.

Instead of generalizing the experiences of a diverse refugee population, the monologues give insight to specific challenges each per faced. We heard about a mother who was supporting her children, and had to hold the family together, as her husband had become too depressed. A sister refused to abandon her sibling who was unable to function independently due to the trauma that she had witnessed. These stories recalled others I have heard over the past four years with their themes of despair and hopelessness. Yet these stories also shared an optimism in the future – that life would improve.

As an alumna of the DukeImmerse program, four years ago I presented a monologue based on an interview I conducted with an elderly Bhutanese refugee in Nepal. While it was frightening to present a story that was not my own, I learned that I could take on the voice of another. Instead of assuming a population’s story was homogeneous I had to go through the process of reflecting on the stories shared with me. Also, striking a balance between what the interviewees had emphasized and what I found interesting and thought was important. In the moment I became Bishnu Sharma, a 74-year-old who had resided in the Nepalese refugee camps for over 20 years: “I love to sing and dance, I am a joyful person. I can sing for hours the different folk songs I learned as a child in my mother country. I do not want to go to resettle but this is what my son wants and all the younger people. They want to resettle for work and for their children. I will go with them because family is most important to me even though I do not want to leave my life here. What will become of me in another new country?”

Personal narratives inform, engage and inspire. It is important that we all learn to listen to the stories of others. In doing so, we can connect and find a common ground on which to revel in our shared humanity.