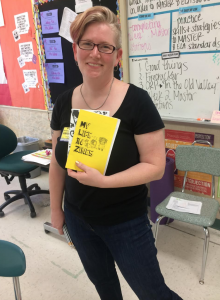 This week, Kelly Wooten, the research services and development coordinator librarian for the Sallie Bingham Center for Women’s History and Culture at the David M. Rubenstein Library, led a workshop for the girls at Brogden about feminist zines.  When Wooten first asked if anyone knew what a zine was, the room was silent.   Pointing to the classroom door, which is decorated with photographs of smiling students and positive messages, Wooten explained that a zine can take many forms. Ultimately, however, zines are characterized by their homemade construction and ability to spread messages outside of the mainstream media.  In the diverse collection of contemporary and historic zines that Wooten shared, including one that she had authored, the girls recognized that feminism, identity, and storytelling were all predominant themes.  In addition to introducing the girls to an engaging form for expression, I think that this meeting was particularly valuable because it brought greater visibility to “zinesters” and spread their ideas, thoughts, and opinions to a younger generation of women.

In the 1990’s, the riot grrrl movement, a punk, do-it-yourself, subculture that developed amidst the third-wave feminist movement, popularized zines as a method for woman-identifying individuals to find solidarity through art and creation.  Thus, zines became tools to enhance the visibility of women’s issues, establish a space for women’s voices, and connect women in different social circles.  In the fall of 1992, Sarah Dyer, a comic book artist and avid zine reader, decided to start Action Girl Newsletter, a review-style zine, in order to “network all the girl zine and mini-comic creators [she] could find.” Eventually with the rise of the internet and the popularity of blogging, the distribution of physical zines began to fade.  Dyer, however, had carefully stored hundreds of zines, some which may have been the only copies left in existence, and donated her collection to the Sallie Bingham Center.  Indeed, Dyer explained that if “[she] really wanted to see these zines preserved, [she] needed to find a safer place for them.”Since her initial donation, the Sallie Bingham Center’s zine collection has flourished to become one of the largest in the United States.  Due to the tremendous care and effort of the librarians at the Center, the girls and women of the riot grrrl movement and beyond can continue to be heard.

Next week, the girls will begin making their own zines. I think that by creating zines, or perhaps creating one collective zine, the girls will have an appropriate forum in which to share and document their experience participating in the mentorship group. Perhaps our tour this weekend to the Scrap Exchange, a woman-founded, creative reuse arts center,