Would You Steal to Educate Your Kids?

It’s the classic question: is it still wrong to steal food if you do it to feed your starving children?
Kelley Williams-Bolar, a poor black woman from Ohio, faced the same problem in her own life but slightly modified: is it wrong to commit fraud if it is the only way you can give your kids access to a good education?

Williams-Bolar was arrested and found guilty of tampering with records and falsifying enrollment papers for her two daughters so they could attend a prominently “rich, white” school for two years. The school has closed enrollment policies and it costs $800 per month to enroll students who do not live in the district.

Williams-Bolar was sentenced to 10 days in jail, two years probation, and 80 hours of community service. There is also a possibility that Williams-Bolar will no longer be able to obtain the teaching degree she was close to obtaining at the University of Akron in Ohio.

Most would agree that committing fraud, as a general principle, is unacceptable and must therefore be punished. As a single act, there may not be a hugely significant cost to Williams-Bolar sneaking her daughters into the school, but the entire system would unravel if every poor mother followed in her footsteps.

But it is important to look at Williams-Bolar’s intentions and the situation she lives in.
Is it possible that her only real chance to provide her daughters with a real life opportunity to succeed required her to break the law?

It seems as if through a number of underlying factors in this case point to systematic discrimination of women like Williams-Bolar who feel they have no better option than to break the law to help their kids succeed.

Her desperation makes a powerful statement about how our current public education system may be failing certain students (most likely those who are already the most disadvantaged).

It is important to look beyond just the individual players in this situation, and look back into the history of Akron and how African Americans have been disadvantaged and discriminated against for generations. The civil rights history of Akron reminds us that many African American families may be facing a life of poverty due to structural reasons from the past and maybe more needs to be done to “even the playing field.”

Although, we like to think that our society has moved away from segregation, this map of Cleveland (nearby to Akron) makes me think otherwise: 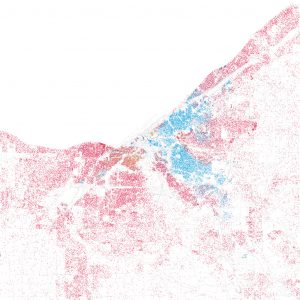 Each red dot represents 25 white people, and each blue one represents 25 black people. Blacks and whites clearly continue to live separately, and race continues to correlate with socioeconomic status and income level.

Although we like to say that racial discrimination and segregation is in our past, the educational and wealth disparities that continue to perpetuate it say otherwise. In fact, education is the civil rights issue of our time. Public schools are mainly funded by property taxes, and thus richer neighborhoods have better resources, and thus more opportunity for kids. Poor students are essentially banned from these schools. Although there is formal opportunity available to all, it is unimaginable to think that any poor family would be able to pay $800 per month to educate one child. So the reality becomes that poor kids go to schools that typically have less qualified teachers, fewer academic materials, poor facilities, and so forth.

As a woman who was training to be a teacher (but might no longer be able to do so), Williams-Bolar certainly understands the value of an education. Maybe she realized that the risk of committing a minor legal offense was worth the added educational value her girls would be getting at this school. I think that most people could imagine making the same choice that she did.

On principle, we have to hold Williams-Bolar accountable for breaking the law, but I think we also need to hold ourselves accountable for the inequalities that continue to be apparent in our public education system. A strict enforcement of the current laws and the Williams-Bolar ruling will probably help deter parents from falsifying enrollment papers in the future, but what is being done to help these parents find a way to provide equal opportunities to their children?

Of course our legal system cannot allow people to tamper with records in order to access resources that they have not paid for. But we also should not accept a societal structure which continues to systematically discriminate and withhold opportunities from certain groups of people.

Why did Williams-Bolar have to sink to such desperate measures to get a better life for her children? I would argue that she should have never had to make such a choice in the first place.