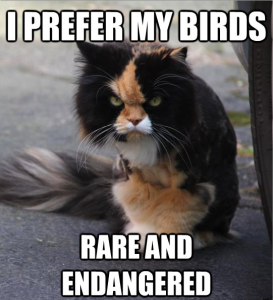 Everybody knows that cats are evil. But nobody understands this more than the birds of New Zealand, which have been mercilessly hunted down by the ferocious felines. So why do we care? There are a number of endangered birds in New Zealand, a number of which are flightless. Gareth Morgan, a prominent New Zealand economist, has suggested that New Zealand eliminate cats from the country altogether. Morgan claims that one of the country’s greatest assets is its natural resources and wildlife, and that cats are directly to blame for the endangered status of numerous birds. Of course, New Zealand is a nation of cat ladies, with more cats per capita than any other country in the world. Clearly, this sets the stage for a war of epic proportions: bird lovers v. cat ladies. Anybody who has had any experience with the interwebs understands the significance of this event.

Let’s take a step back for a second. Does the government have the power to control species, and perhaps more importantly, should they? This has occurred in the past, but it should be noted that Morgan’s plan doesn’t call for an all out cat killfest-instead, it suggests that the cat population be controlled and monitored. Given that feral cats are blamed for the majority of bird kills in New Zealand, it makes sense that Morgan’s plan emphasizes the spaying and neutering of cats. Some opponents to Morgan’s plan however cite that nature should be allowed to take its course. Unfortunately, over 30 bird species in New Zealand have gone extinct already, and many more are endangered due to the presence of imported cats. It seems to be a fair compromise for New Zealanders to make to preserve the biodiversity that makes New Zealand so special. But maybe that’s just because I’m a dog person.