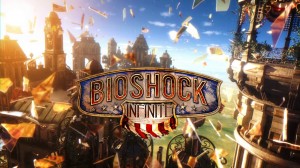 I’ve been trying to connect to a childhood I never had recently. I read a lot in middle and high school, so much so that the word “bookworm” was incorporated into both my identity and gmail address. This obsession with the written word forced out many other forms of media, including the uniquely (seemingly) youthful video games. From both an urge to reconnect to that lost experience and the persuasion of friends, I have begun to casually pick up the occasional controller and press a few button.

Last week I purchased and then obsessively played a game that the Internet had raved over, “Bioshock: Infinite.” It’s a first person shooter game (arguably the most popular format in the console game category), which takes place in an alternate history of the United States. I was drawn to its steampunk graphics and complex mythology, but what I wasn’t expecting was that the violence in the game. I understood that there would be fighting, but I wasn’t expecting the blood and occasional gore. It seemed somehow at odds with the detailed and beautiful scene design. Combat felt like a Quentin Tarantino gunfight in the middle of a Wes Anderson movie. It was incongruous.

This uncanny feeling was one that left me with two questions: 1)   Why is that violence necessary?  2)   What’s it doing to me?

The first question is perhaps too large for this blog. The reason humanity is attracted to violence, both watching and electronically creating it is a big question. And there are many people who would deny they find pleasure in violence, but the preponderance of shows like CSI, Game of Thrones, and True Blood tells a different story. We are attracted to the forbidden, dark parts of humanity, it would seem, and that is something worth considering. However, I don’t have the training or experience to do an analysis any more rigorous than any other person.

But, I can speak to what observable effect my foray into video games has produced in myself. Here’s it’s important to establish that I’ve never been a violent person. Physical aggression never occurs to me. I hate most team sports because of the aggressive behavior they require. I cringe when I see gore in TV and movies. Well I used to. After only a week of playing a violent video game my reaction to blood and violence on TV is noticeably less visceral. No, I have not become violent, but I do think I have increased my tolerance for violence, which is worth pausing over. Desensitization is a danger to creating more violence and not stepping up or in when violence is being done. This article suggests that exposure to violence allows us to shut off our emotional and physical reaction to it, thus making us less likely to intervene. To clarify, I’m not wading into the fray around whether or not video games make us more violent, but rather I am swayed by the argument that a numbing to violence is a deterrent to its prevention.

For me, rarely has the idea that my choice of media consumption affected me so clearly.  If my media choices are inextricably bound with the other choices I have  made and will make then I believe I have a responsibility to myself to be a careful curator. Now, I just have to figure out how.