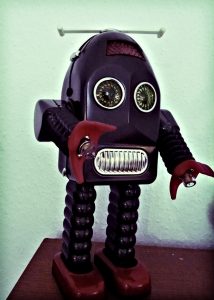 In the era of aging baby boomers, we are concerned about many things: the death of social security, the rise of medical costs, and the overcrowding of nursing homes.  One thing that I am sure we have not considered is the rise of robots.

Yes, you heard (read) me correctly – robots.  According to a February 3rd BBC News article, Japan is pioneering `a caretaker robot for the elderly.  Ri-Man is his name, and he is currently on the market!

Given the declining birthrate, loosening family ties, and strict immigration laws, nursing home workers are in high-demand in Japan.  Leave it up to Toyota and Honda to decide that in addition to automated vehicles, they could produce automated nannies as well!  Ri-Man may be native to Japan, but he could soon be looking after of our baby boomers.  The U.S is also in dire need of elderly care-takers.

Although I was initially very excited by the technology behind Ri-Man, I quickly grew unsettled by the idea.  At first, I couldn’t pinpoint the source of my uneasiness.  After all, robots are appliances, and I use appliances all the time.  My coffee-maker brews my coffee, my microwave heats up my ramen, my straightener tames my hair – I even use an electric toothbrush for goodness sake!  So, why am I so bothered by Ri-Man when I am perfectly content to have technology assist me in every other aspect of my life?

The answer is actually quite straightforward.  I am not disconcerted by what Ri-Man does, but rather who he takes care of. In an age when technology can replace almost anything, I think it is still callous to assume that robots are adequate substitutes to look after our parents and grandparents.

Robots can’t replace human love, human attention, or human touch.  Although Ri-Man can take your pulse, measure your blood pressure, and administer your medication, he can’t talk to you about your day, empathize with your pain, or show genuine affection.  Social isolation in nursing homes not only increases loneliness, but also has adversely affects health.  (See “The Relationship of Social Engagement to Psychological Well-Being of Older Adults in Assisted Living Facilities” for more information).

Call me old-fashioned, but sorry, Ri-Man, I don’t believe technology should be omnipotent.