“Una Luz” Went Off in the Grocery Store 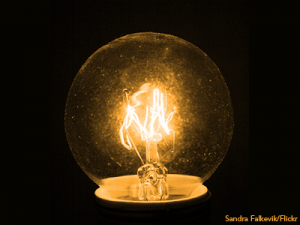 I had an encounter in the grocery story last night that I have just realized was not a very sensitive one on my part. The employee checking me out was Hispanic, and was explaining to the Caucasian bagger the translation of the Hispanic dish that she had cooked for dinner, pollo en crema. The bagger chuckled and said another employee had been teaching her a little Spanish. She pointed up and said, “luz?” Then she turned to me and asked me if I knew what that meant. I could, in fact, utter a hesitant, “light,” but I’ll have to admit, it helped to have the pointing cue. She was impressed, we were laughing congenially, but then I let out the big qualifier, “Oh no, I really am awful at Spanish, I suffered through my requirements and that was it for me!”

It’s true. I have almost zero proficiency in Spanish, or any other language besides English. But the fact that I could joke about scraping by in required courses and then moving on, no longer letting it affect my life, is somewhat of a luxury. Sometimes I’ll think casually that I wish I could speak another language, if only I were better at languages, but really just for the exotic, romantic appeal. I probably will never put in the effort to learn another language with proficiency, and my guess is that I will not have to.

In comes the guilt for my statement and mindset, when I think about the interactions I have here at Kenan with resettled refugees who are working hard to learn English so that they can more effectively make a life for themselves in a new country. For those eager to learn, and given the right environments in which to do so, the language skills and comfort can come. There seems to be a mismatch, however. Hordes of kids like me grow up with multiple levels of required language classes, but in most settings there is not true emphasis on their importance for a more open, accommodating society. Meanwhile ESL classes, whether in schools or through ad-hoc NGOs or other institutions, often may lack structure, resources, and continuity. Languages are conduits into cultures other than our own, and we should give more attention to fostering mutual pathways between them.

I’m sharing a little pondering on a statement from the grocery store line. We could probably all benefit from greater intentionality and awareness in our day to day interactions.