Editor’s note: this blog entry was drafted the week prior to the November 8, 2016 election. 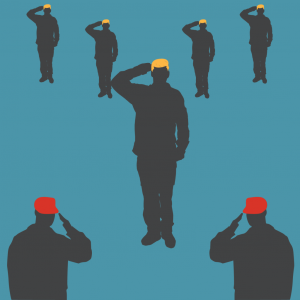 If there’s anything I’ve learned during my time with Duke ROTC, it’s that, other than a sense of general deference and respect to the armed forces and a plethora of opinions about the military as an entity, people don’t  know how to think about the real men and women that make up its ranks. There seems to be a substantial gap between the civilian and military communities, and while this gap makes sense for many reasons, one of its downsides is that people can forget just how human the military actually is.

In less than a year, I will commission as a 2nd Lieutenant in the U.S. Army. This means at for my entire Duke career, I’ve been getting up at 0-dark-thirty for Physical Training way too many times a week, running around the woods using nothing but the magic of a map, compass, and protractor, and learning how to truly lead others. I did this all in preparation of joining an organization whose fundamental purpose is the management of violence. It’s an incredible call, and even with all the hardship that is bound to come out of it, I am beyond excited to dive in.

What I’m not excited about, however, is the possibility that the Commander in Chief of the incredible, dynamic, human organization that is the Army could be none other than a crooked, corporate despot named Donald Trump… and judging by current polls and the inevitability of yet another Hillary scandal, this possibility becomes more and more real with every passing day.

People have (sorta) joked with me, saying that if Trump  wins I should just ‘disappear’ during my internship in India next summer, or, better yet, join the rebel faction that will “eventually” spring up in opposition to him. And yes, while the absurdity of those suggestions is obvious, within them is a very real question: “You wouldn’t really serve under Trump, would you?”

But the answer is, yes, I would. If he were to win the presidency and therefore be appointed my Commander in Chief, I would salute him, I would respect him, I would obey him. Because when I put on my uniform and walk around campus, when I say the Oath of Office a year from now and make that fated step from cadet to Officer, when I lead my soldiers to training and to battle, I am no longer just myself. I am beyond myself. I am a servant of this nation and of the American people. But while we still have a chance, I have one thing to say those people: