Thoughts from Team Kenan: What has couching about citizenship this year taught you? 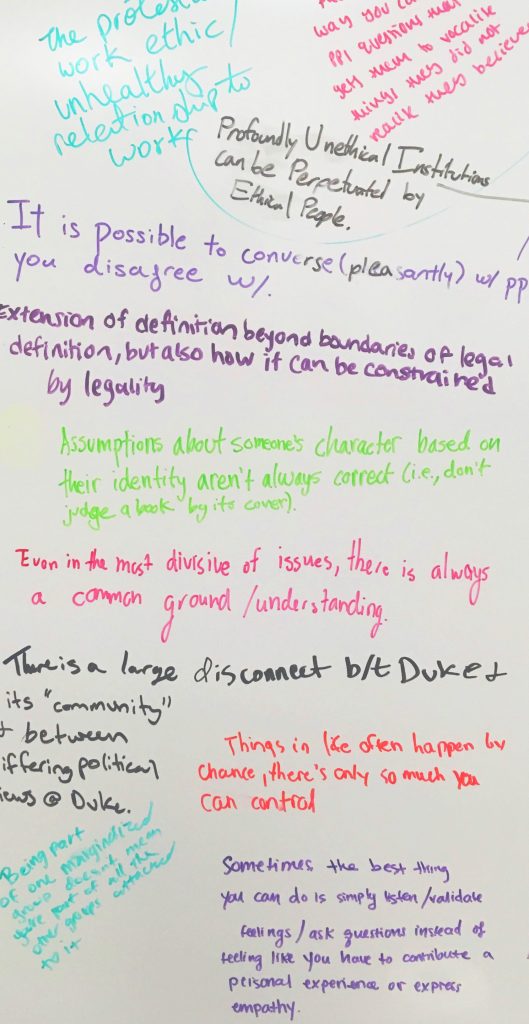 Carolyn Chen: Institutional legitimacy is important with regards to citizenship, and especially laws and political definitions of who is a “citizen.” It is crucial to be critical of the power structures that dictate these terms, because the process of being granted the benefits of “citizenship” is not always a just one.

Emma Cairns: Citizenship, despite its primary roots in legal residence in a country, has become a carrier of great pride for many. Claiming citizenship or lack thereof is a fundamental part of many students’ identities. How we understand ourselves, our wants and our needs relates to our sense of citizenship.

Hyonjun Yun: I thought of citizens as fighters for a country, but hearing stories of struggle taught me that citizenship is often about being a fighter for a cause. Sometimes claiming a cause is an excuse not to fight. For example, I have noticed the prevalence in relying on “I’m a libertarian” to not think about other people’s issues. Marginalized communities are probably not libertarians. They have systemic problems that affect their daily lives. People of privilege can afford to be libertarians, because they do not face such struggles.

JJ Jiang: Couching this year showed me the immense sympathy that some possess for those that hold opposing views to themselves. During the week on immigration, I sat down with someone protected by the Dreamer’s Act who explained that despite how Trump’s immigration reforms worry their family, they understood how those who supported Trump had personal experiences that differed from theirs.

Rishi Dasgupta: Citizenship as a status feels less real than citizenship as an action. You might not care much for patriotic music, but when you’re the one playing it, accompanied by an entire orchestra, and you’re playing for Vietnam war veterans, it feels like the most important thing in the world.

Lukengu Tshiteya: This year has taught me that citizenship at its core is as simple as translating a shared affinity or concern for the hierarchy of human needs into concrete action. It knows no bounds. And when this is realized, it can act as a stimulus for changing our world.

Sarah Watkins: My time spent on the couch has led me to reflect on the spaces and platforms that Duke creates; elevating voices while simultaneously silencing others. We do not often take the time to think: while I’m speaking, who am I silencing? Whose story am I not allowing to be heard or told?

Carolyn Huynh: Rather than feeling the need to express empathy, you can simply listen and validate the thoughts of others to show that you care. Citizenship on campus encompasses social, academic, cultural, political, and many more identities; during conflicting moments, it’s hard choosing which ones to prioritize and when.

Guadalupe Pulido: This year I met someone who looked like me but held different beliefs. It was the first time I had met another Hispanic person who have a different idea on what it means to be “American”. Finding a Hispanic person so outwardly supportive of Trump was a shock, but it showed me that being part of one disenfranchised group does not immediately make someone part of other groups associated with it. The context of one’s upbringing and community can radically change one’s political and social views.

Thomas Huck: Citizenship is a broader concept than it appears at first—it extends to cover all of our relationships with the political and social institutions. From how Duke students relate to their new community and city, to how the children of immigrants, by recalling their family’s past, can empathize with the struggles faced by Latin American refugees, I have learned that it is impossible to separate citizenship from identity.

Kyle Melatti: As Duke students we must strive to become citizens of our school, our city, our country, and the world. Legal citizenship is the least important kind. Acting on your citizenship means voting, taking part in community events, and setting an example for those around you.