The Right to Relate 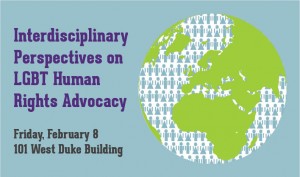 I’m just coming out of a conference held today at Kenan, Interdisciplinary Perspectives on LGBT Human Rights Advocacy. We had lawyers, activists, and social scientists interacting with each other, as well as with a diverse audience who were free to join the conversation. Because of the international array of topics and examples, I realized what a spectrum there is in the evolution of rights around the world. It was very interesting to see the intersections between the different disciplines and modes of engagement. How much does the law affect social change, and vice versa? What is the best entry point for change in different societies? It also became clear that because of the endless spectrum of identities, priorities can be at odds. A fascinating example came from China, where there is currently a rift forming within the activist community. While gay activists think of marriage equality as the primary goal, lesbian activists are actually fighting for the right not to marry, because of the tremendous pressure for women to marry at a certain age regardless of any factors, including sexual orientation. A nice takeaway that speaks to a more global and universal goal is the idea presented by one panelist that all people should have the right to relate – to establish and promote the relationships of their choosing with fellow humans beings.