The Magic of Math 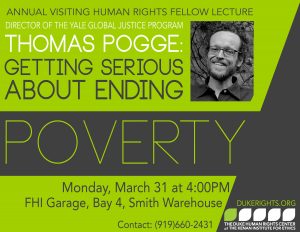 Arithmancy…that’s the word I kept repeating to myself yesterday. For those unversed in little known occult practices or Harry Potter, arithmancy is the idea of magic through/with numbers.

My mathematically inclined friends would want me to point out that all math is somewhat magical to them. I would point out to them that the only people who agree are in insane asylums or math departments. As you can see, I am a number adverse human. I understand their importance, while also being unable to make myself work with them. Partially, I express skepticism at numbers because I am bad at them, and partially because my generation has been raised with the idea that you can make numbers “say” anything.

I was reminded of this point yesterday as Visiting Human Rights Fellow Thomas Pogge gave a lecture called “Getting Serious about Ending Poverty.” What that title does not belie is that part of the seriousness Pogge is referencing is quantitative seriousness.

According to Pogge, more than the level of poverty having changed over the past 20 years, the way in which we calculate poverty has changed. We’ve switched from raw numbers to percentages, redefined who was impoverished, grouped households and converted number using decontextualized currency exchanges, which all build to a seeming decrease in the poverty level.

My skepticism seemed to be warranted.

However, watching Professor Pogge break down those numbers and skewer international organization’s claims with math any fifth grader could do was somewhat mystifying. It made me remember that process is important, and an understanding of process can be an incredible tool. It’s good to stay in touch with the fact that it’s hard to make moral evaluations when I can’t understand the data.

Maybe my math friends are right, maybe there’s a magic in numbers.

For more on Professor Pogge check the DHRC@KIE page for an interview with him about his work.