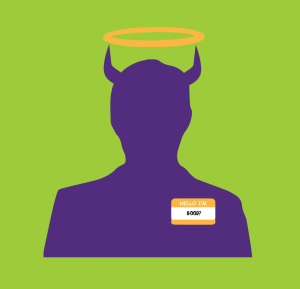 There’s this new show on NBC, The Good Place, that is actually about becoming a good person. Kristen Bell plays a character, Eleanor, who has incorrectly be sent to the “Good Place” rather than the “Bad Place.” She quickly discovers that if she does something “bad,” like littering, bad things, like trash falling from the sky, happens. So she tries to learn to be a good person; luckily her soulmate (well the “real” Eleanor’s soulmate) happens to have been an ethics professor on Earth.

Let’s just take a second to absorb that. There is a show that is teaching the world how to be a better person

What does this say about the world today? Apparently the network executives at NBC thought something along the lines, “You know what, yes. A tv show in which Ted Danson tells those millennials, like Kristen Bell, how to be good is PERFECT! And it’s entertaining so we’ll trick everyone, so while they think they are just enjoying a show, they are actually learning how to be a good person.”

Okay, it is entertaining. I enjoy watching Ted Danson play this god-like character after watching him as the womanizer bartender in Cheers (my parents own the tv at home and their entertainment preferences haven’t changed), Kristen Bell struggling to shirk her morally-questionable habits, and William Jackson Harper play an exasperated ethics professor trying to determine what’s the right thing to do.

It even is engaging as an ethics nerd. How often do you get to watch tv and hear the characters casually and seriously discuss Mill and Kant? It’s so cool… in a very nerdy way.

I cannot recall a time that entertainment targeted towards adults has been so blatantly about morality. It makes me wonder what that says about the morality of those viewing it.

We are incredibly divided right now, politically, religiously, socially, financially, geographically, etc. We do not really agree on anything. We are so divided that we are afraid of the other side.

Or at least, that’s what NBC seems to think. Maybe this funny, relatable show about being a good person can be our framework to engage in that discussion again.

If the show fails, we can at least be excited that the Chicago Cubs won the World Series!.