The Girls problem: Do we give Lena’s curves too much love?

Since HBO’s Girls first aired in April 2012, I have been an avid fan, admiring the show for its slightly bizarre characters, quirky humor and honest (sometimes grossly honest) portrayal of life as a 20-something in New York.

One aspect of Girls in particular continues to raise enormous controversy; author Lena Dunham, and the character, Hannah, she plays on the show have been both praised and criticized for their unapologetic fatness. Dunham is commended for her refusal to succumb to traditional Hollywood standards of feminine size and beauty, even as she grows ever more popular. And women around the country are drawn to Hannah as a ‘relatable’ character, a ‘real-sized’ girl who loves herself and her body. As a tall, athletic, and thoroughly un-petite woman myself, I have always been a vocal member of the ‘embrace your curves’ team, and I admire Dunham’s boldness, but I have come to question the particular brand of self-confidence that Dunham – through Hannah – is promoting. In preparation for the show’s Season 3 premiere, I recently re-watched several (okay maybe all) of my favorite past episodes. What I observed was a character that validates our own laziness, gluttony and whiny self-indulgence, using a skewed notion of feminist values. 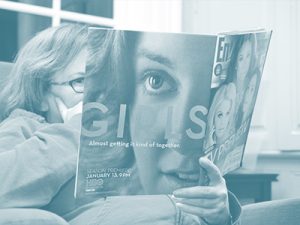 We are quick to condemn movies or shows that glorify drinking, smoking, drugs, sexual promiscuity, and other generally ‘bad’ decisions, particularly when those movies or shows are directed toward a young and easily influenced audience. And yet instead of criticizing Hannah’s habit of eating Cool Whip out of the container, we applaud her for being ‘comfortable with her body.’

And unfortunately, this attitude – that self-indulgence equals self-confidence – is not unique to the show, but has become ingrained in the feminine culture of the millennial generation. But what I fear many women of my generation have failed to fully understand is that exercise and eating well are not an indication of ‘giving in’ to societal pressures, they merely show that you love and respect your body enough to take care of it. Because the fact of the matter is that Hannah is not ‘curvy,’ she is overweight, by 15-20 lbs, if I had to guess. That might not matter if she exercised; recent research has shown that being overweight does not necessarily make you less healthy, as long as you are physically fit. But Hannah openly broadcasts her refusal to engage in physical activity, therefore putting her at greater risk for heart disease, diabetes, high blood pressure, and certain types of cancer. But at least Hannah’s body accurately reflects her habits. A more concerning trend is the advocacy of overindulgence by public figures who clearly never overindulge. Case in point, the supermodel Cara Delevigne recently posted a quote on her Instagram account that read “Eat whatever you want, and if anyone tries to lecture you about your weight, eat them too.” That’s fine for her to say – if she wants to take a break from her usual diet of cocaine and cigarettes to eat a whole box of doughnuts, I doubt it will be hugely detrimental to her size 0 frame. But normal women, the type of women who listen to her and follow her, cannot live by a mantra of indulgence and still expect to maintain a healthy weight. Models, and other women who are admired for their physical perfection, have an obligation to acknowledge that their looks are the result of not just genetic gifts, but of constant time and energy poured in to obsessive, often unhealthy eating habits.

This blog was very difficult for me to write, because the biggest issue about the culture of overindulgence is that it is intimately tied to modern ideas of feminism and female-empowerment. It has taken me two years to fully articulate my feelings about Hannah’s character, because I feel like a ‘bad’ feminist, like some kind of traitor, for not loving her fatness. Hannah’s behavior is not the result of confidence, but of deep-rooted insecurity and unhappiness. Confidence is having the courage to say “I’m trying to lose weight and get in shape, so I’ll just have a salad” even when all your friends are eating cheese fries.