The Dark Side of Black Friday 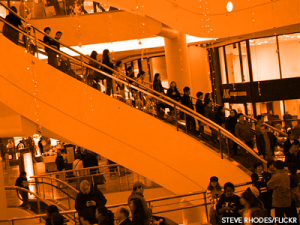 This year as families were sitting down to feast on a thoughtfully planned out and carefully cooked dinner, 307. 67 million Americans were standing in lines outside of major retailers. This year Black Friday, the day of shopping historically following Thanksgiving Day, took over Thanksgiving Day. Stores such as Wal-Mart opened as early as 8 p.m. on Thanksgiving Day. About 10% of the shoppers were out at stores by 8 p.m. on Thursday and an estimated 28% of shoppers were at the stores by midnight, compared to 24.4% last year. That means millions of Americans cut their Thanksgiving festivities short to shop. So it can be argued that sneaky and creative retailers have transformed what was created as a day of thanks into a day of greed.

As evidence note that the number of Black Friday sales this year hit the all time high. Total spending over the four-day weekend totaled $59.1 billion, up 12.8 percent from 2011. Thanksgiving online sales rose 32 percent from last year to $633 million. And online sales on Black Friday were up 26 percent from the same day last year to $1.042 billion. Chew on these facts. They don’t taste as good as that homemade stuffing or grandma’s apple pie did, do they? That’s because they’re not delicious, appetizing, or appealing. They are a reflection of the disgusting consumerism that has engulfed America. They are evidence that desire has overwhelmed gratitude. And that’s not a leftover I am anxious to dig into.

However, as terrible as this all may seem there is a flip side. We must think about the intentions of these anxious shoppers. Families with limited means may see Black Friday deals as the only opportunity to buy popular, new items for their loved ones. Going to the sales then becomes something that people do not out of an uncontrollable greed, but an admirable love. Black Friday deals, especially for those that are economically constrained, may be impossible to resist. What these frugal shoppers don’t know though is that Black Friday deals often fool us into paying more than we should. Black Friday is every retailer’s most important game of the year, and they enter the battlefield well prepared to make consumers help them leave the red and enter the black.

Black Friday deals, you may have noticed, don’t apply to every item or every corner of the store. Instead, retailers highlight a few hot ticket items at low prices to lure consumers into the stores where they inevitably end up spending on other items that are not at a reduced price. Between retailers convincing you that prices will go back up after Black Friday and placing high-margin items at eye-level, you are sure to make some uninformed purchases on this crazy day.

So I think it is safe to say that there is something ironic and ultimately sad about Americans forgetting the meaning of Thanksgiving to wait in the frigid cold all night to save $50 on the newest gaming console. Yet, we can find comfort in the thought that many of these consumers are out there not to fulfill their own selfish desires, but instead to check off items on the wish lists of loved ones. But, can we come to terms with the attractiveness of these deals when as a result of them, people each year are injured and killed by other desperate shoppers’ insane behavior?