Read what else the Kenan Institute for Ethics is doing to equip first-year students at Duke to tackle big questions and live better through the What Now? network.

Wearing a red Make America Great Again hat and a white trash bag with two holes cut out for sleeves, Brendan Dickson takes a seat at the end of a long rectangular table before class starts in the Duke West building.

It’s midmorning on Halloween, and the first-year student is trying to prove that conservatives aren’t treated unfairly on Duke’s campus.

“My faculty-in-residence is pretty conservative,” Dickson says. “He’s always going on that you never see any Trump hats on campus, and he’s convinced that means conservatives are made to feel unsafe about their opinions.”

“You’re saying conservatives aren’t oppressed, but then you’re ripping conservatives,” Mand says. “Why are you doing that? I don’t think it’s cool. I’m being offended on behalf of people talked about as white trash. These are people, and then you’re out here mocking them at one of the most privileged institutions in the country.”

“Right, I think it’s good to laugh at yourself,” Dickson says.

“Right,” counters Mand, “but you’re not these people.” 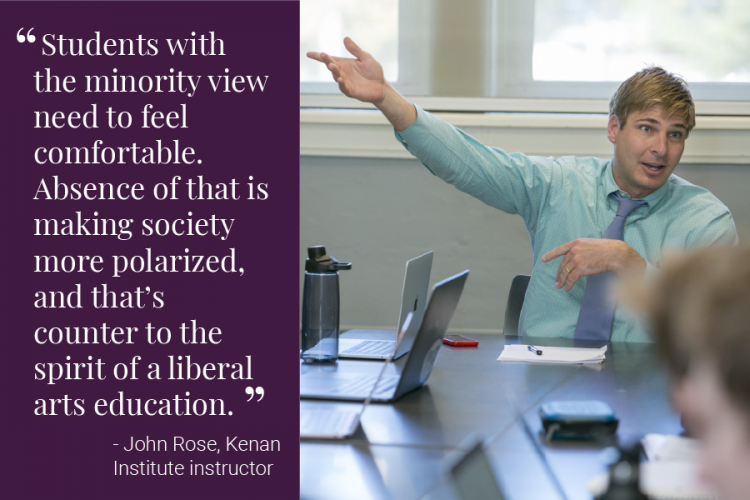 Welcome to “Virtuous Thinking in an Age of Political Polarization,” a Kenan Institute for Ethics/political science course for first-year students that’s among Duke’s efforts to help students deal respectfully with those who hold opposing views.

Kenan Institute instructor John Rose is challenging his students to go beyond “self-segregation,” the practice of associating only with those who share your beliefs.

“Our motto is ‘Truth, not victory,’” Rose says in an interview. “Students with the minority view need to feel comfortable. Absence of that is making society more polarized, and that’s counter to the spirit of a liberal arts education.”

Using a mix of moral philosophy with social and political science literature, Rose’s course examines the current phenomenon of political “partyism” and cultural segregation. He urges students to “rise to the occasion” — get to know people and why they believe as they do.

Class topics include “The Culture of Contempt,” “The Value of Intellectual Diversity” and “The New Tribal Left and Right, Racism and Bigotry.”

“It really teaches them how to disagree well,” says Rose, who is also associate director of the ethics-promoting Arete Initiative at Duke. “Our class tries to transcend tribalism and find common ground.”

Students say that the class is doing just that.