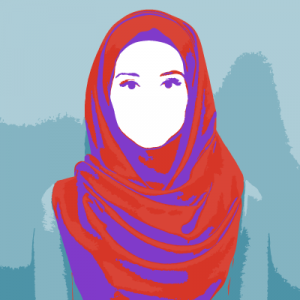 Editor’s note: this blog entry was drafted the week prior to the November 8, 2016 election.

I’ve been wearing the hijab since second grade, and I have never felt genuinely afraid of walking down the streets with my hijab on until now. I grew up in the suburbs of DC, which are known to be quite diverse. I went to a high school where minorities were prevalent and where I could spot at least one other hijabi in the hallways as I would head to class. So far, I’ve been fortunate enough to not be a victim of an Islamophobic attack. Unlike some other hijabies, I’ve never directly been called a terrorist or a rag-head. But with the rise of Trump and subsequent attacks on minorities, I’m starting to feel prone to an attack.

Even before the rise of Trump, we’ve had attacks like the Chapel Hill Shooting, where three Muslim students were shot dead execution style in their own home by a white anti-religion male. And with the rise of Trump, the number hate crimes have been spiking. Just two months ago, in NYC, a 60-year old woman named Nazma Khanam who was wearing traditional clothes at the time, was stabbed and killed while walking home. In the same city, eleven days later, a Muslim woman was set on fire. Just two weeks ago, three white men in Kansas were caught attempting to bomb a mosque housed within an apartment complex, containing hundreds of Somali immigrants. There are obviously more — these were just the first three to come to my mind.

If Trump becomes president, hate will become legitimized. And once this hate is legitimized, I can’t imagine how many more Islamophobic atrocities will occur, not to mention a spike in hate-crimes that will be targeted to other minority groups, including hispanics/latinos, blacks, women, and the LGBTQ+ community.

It seems that most people I talk to confidently claim that Trump won’t become president. But I feel that they make this claim because that’s what they want to believe. I want to believe it as well, but there is no way I can truly tell. I know that we are afraid, and that we’re trying to desperately hide our fear behind a false sense of certainty.

A friend of mine invited me to an election party, where Duke students will be indulging in food and chilling out while awaiting the election results. But I can’t call it a party. If Trump becomes president, I will walk out of the “party” feeling even more fearful. If Clinton becomes president, I will also walk out of the “party” feeling fearful as there will undoubtedly be violent backlash from Trump supporters.

Another friend of mine, who is a hijabi, semi-jokingly told me that if Trump becomes president, she and I should stay indoors as much as possible. She told me that she might actually take off her hijab for a week because it’d be better than getting shot. For her to say this both scared and frustrated me –  we shouldn’t have to be living with this fear. This isn’t the reality that I’ve lived in. And this isn’t a reality that I think I can handle.