Around this time of year, if you happen to stop by West Duke—it’s very quiet, sometimes eerily so, with the students gone—you’ll see on one of Kenan’s two video screens, usually used to announce events during the school year, a quite lovely watercolor map of the world. On it there are a smattering of red pins. Several, you’ll notice, are clustered loosely around where North Carolina begins and ends, and where its western borders meet those of Virginia and Tenneesee, whose own borders meet those of Kentucky and West Virginia, and then to the South, the lowest-most points of Appalachia in Georgia. And then there are the pins a bit closer in, toward where I imagine West Duke would register on a satellite map. Zoom out and you’ll see pins dropped in California, Ireland, Kenya, and Jordan.

It’s always exciting to see where Kenan students fling themselves and land during the summers, and what types of projects they undertake in said places (on said pins). It’s especially exciting to me this year to see projects equally balanced between home and abroad—and to see places close to Duke and Durham signify home for a number of undergraduates. The Bull City Dignity Project, spearheaded by Summer Fellows alum Lara Haft and Project Change alum Kari Barclay, as well as documentarian Mariana Calvo, will engage Durham high-schoolers and Durham community members in a documentary theater project. At the heart of the project—which you can read more about here—are questions surrounding the idea of “dignity”: “What worth do we place on ourselves and on those around us? Is dignity something we’re born with or something granted to us by others? How do our identities shape how people perceive us and how we perceive ourselves?”

There are four Kenan Summer Fellows this summer, and their first updates are just now rolling in: from San Francisco, CA (and eventually Nairobi, Kenya); Clarkston, GA; the Appalachian Mountains of West Virginia; and, well, cyberspace. On the latter: Alex Zrenner, a Project Change alum and Team Kenan member, will investigate the ethics of online society and economy by focusing on a cyber harassment victim advocacy organization. I’ll be interested to see how Alex develops a sense of place and centrality through her research, which draws from instances of harassment that could be catalogued to no end online.

I’m winding down my tenure here—next week will mark my last blog post for Kenan before our new Bear Fellow, Cece Mercer, comes onboard to introduce herself with her first. Very soon I’ll publish what I’ve put together from my two weeks in Ireland last summer, which I spent partly in conjunction with the DukeEngage Dublin students (a new set is about to embark on their time in Ireland; watch the Kenan site for more), and partly in the throes of an investigation into the abrupt closure of a creative community center downtown. Central to the piece is a type of a mapping, a pin-dropping, which both reinforces the idea of claiming space and invites readers to embody the landscape themselves. Another way to do that is, of course, to imbibe the place-based stories of others—and luckily, you can, by following the stories of where Kenan students have immersed themselves this summer. 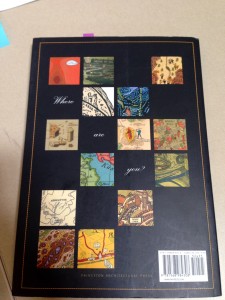 There is a book in my office with the words “You are here” on the cover. It was bought in Boston, then an unfamiliar city. I gravitated toward it in the basement of the Harvard Book Store not for the globular shapes and colors on its cover, nor for the title’s reassurance of stability. At the time, the book was actually displayed backwards. “Where am I?” I was thinking. “Where are you?” the back cover answered—answers—back. Between a grid of small, colorful maps are these three words, one falling after the other, like a more wistful Tic-Tac-Toe.

And now I am sitting at my desk, in my office, and to the right of me is this book. I flipped the cover over, so I’m still reading the words “Where are you?” I brought the book to work because Project Change begins in two weeks, and—without giving too much away, as mystery and messiness are hallmarks of the program—we’ve been strategizing how 21 incoming Duke students can document Durham’s geography over the course of the week. Many of these students have never visited the city. We want them to be able to stand at the corner of Corcoran and Parrish and know they’re at the corner of Corcoran and Parrish—literally, physically, as per street signage. But we also want them to take stock of how they got there, what types of places they noticed on the way, the attitudes of the people they encountered. If the students ask a stranger where are you?, what does she say in return? How does she describe her place in the city? Can she describe the city without placing herself in it? What are the contours of the city’s history, as she tells it?

Can we literally, physically, map these tellings, these retellings?

I think about Katie Davis’s “Memory Map,” one of the few written pieces included in You Are Here: Personal Geographies and Other Maps of the Imagination. Davis, a writer and former Washington, D.C.-based NPR reporter, began producing the original radio series Neighborhood Stories in 1999. She did something simple, but radical at the time: reported stories from Adams Morgan, on the street and around the neighborhood where she’d lived for most of her life. You can hear one, called “Wide Shot,” here.

In “Memory Map,” she talks about being a reporter in Nicaragua after the Revolution. She was looking for the office of the censor. “A Sandinista official pointed north. ‘Go a few blocks and take a left where the big tree used to be before the earthquake.’” Davis got lost and missed the interview because, of course, she wasn’t there before, or during, the earthquake. She “began to use the story as an example of how different it is down south.”

Until her story of difference didn’t hold up. Davis realized her own tendency to “[use] memory as a map.” Back in D.C., years later, she tells friends looking for an Ethiopian restaurant to check out the one “where the post office used to be”—the post office with brass boxes and huge windows. “Yes, but is the food good?” her friends would ask.

I think about whether I do this. I’ve received messages in the past two weeks from a few people, one I’ve never met, who are about to move (back) to Durham. They ask me what my job is like. They ask me to describe the city. I cast myself as narrator. I say, Durham is different than it was in 2008. I can say, the food is good, and list my favorite restaurants. Of course, there is a lot I don’t say.

12 months ago I moved “back” to Durham*. 12 months ago I started working here, and rambled around Durham with 21 incoming Duke students for a week. Each night I went to bed with a head bobbing between threads of a city I’d known for four years in specific and poignant ways—ways that suddenly, in the context of others’ stories, felt severely limited. One month ago I returned to Durham from one month in Ireland and pointed out new construction around the city to my family. There’s the lot on Main St. that will soon house a Marriott. The architects are preserving the brick façade from what used to be McPherson Hospital. For several years prior, more than just the façade still stood. Anyone passing through downtown could see the sky through the abandoned brick building’s negative space, vines blowing in the wind.

But right now it is right now. I am planning an activity that requires students to document a city they’ve never spent time in: to create a map that incorporates, by necessity, histories and memories outside themselves. I’m hoping it’ll both alienate and somehow ground them. I’m hoping it will help them to straddle, in equal part, questions and answers: where are we? and we are here. To point neither to X nor Y, neither Corcoran nor Parrish, exactly, but to the idea of documenting space itself. To point, even with shaky fingers, at how difficult it is, and how unjust it can be, to pin down a common orientation in the first place. What information do we privilege? What, and who, do we leave out? How do we know? Do we know?

*Note: I adopted this retelling style from a piece posted by Adrienne Mathiowetz on Public Radio Exchange (PRX) a few weeks ago.